What Is The White House Position On Free Speech And Terrorism? 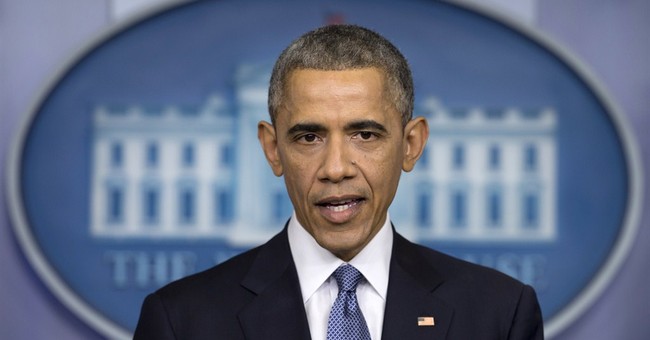 On Wednesday, President Obama condemned the attack on the satirical French magazine Charlie Hedbo noting that the incident, "underscores the degree to which these terrorists fear freedom of speech and freedom of the press. "

But while Obama defended the right of Charlie Hedbo to print cartoons of the Prophet Mohammed, his spokesman Josh Earnest, stressed that Obama was not passing any judgment on the wisdom of Charlie Hedbo publishing the cartoons.

"Well, let me start by saying that there is no legitimate act of journalism, however offensive some people might find it, that justifies an act of violence, particularly an act of violence on the scale that we saw today. None," Earnest began.

"That said, it is up to media organizations to make their own decisions about what they choose to publish, about what stories they choose to pursue, and what sort of commentary they want to broadcast about the world and about their government. ... It’s hard to imagine the President putting himself into a position where he’s offering advice or even direction about what should or should not be published by legitimate, independent journalists. That’s up to journalists to decide."

A member of the White House press corps then asked Earnest to differentiate the Charlie Hedbo cartoons, which Obama apparently has no opinion about whether they should be published, with Sony's "The Interview," a movie which Obama said should be shown despite threats of terrorist violence.

Earnest responded: "I do think I would draw a bit of a distinction between entertainment -- an entertainment company and something that would be more clearly branded as journalism. There are probably graduate-level courses in trying to draw these kinds of lines, so I'm going to hesitate to do that. But I do think there’s a difference between those two things. I think that even in the case of the decision that Sony had to make about “The Interview” the President indicated that he disagreed with the decision that they had made, but the President made no bones about the fact that that was a decision that can and should be exercised by the leader of that company. And I don't think the President, despite his outward criticism of the decision they made, wanted to leave anybody with the impression that he was trying to suggest that he’s the one who should have made that decision instead."

But in the case of a news company printing editorial content criticizing Islam, Obama suddenly has no opinion whatsoever on the matter.

And, as we reported yesterday, this is a new position for the White House. Back in September 2012, while the White House was busy blaming the Benghazi attack on a YouTube video, then-Press Secretary Jay Carney felt very comfortable about offering up Obama's opinion about whether or not Charlie Hedbo should publish the cartoons in question.

"Well, we are aware that a French magazine published cartoons featuring a figure resembling the Prophet Muhammad, and obviously, we have questions about the judgment of publishing something like this. We know that these images will be deeply offensive to many and have the potential to be inflammatory," Carney said.

"In other words, we don’t question the right of something like this to be published; we just question the judgment behind the decision to publish it. And I think that that’s our view about the video that was produced in this country and has caused so much offense in the Muslim world."

Obama's preference that news organizations not publish any material that might offend Muslims was also evident in his September 2012 address to the United Nations where he said, "The future must not belong to those who slander the prophet of Islam."

So which is it?

Does the future belong Charlie Hedbo, Sony, and freedom of speech?

Or does it belong to North Korea and terrorists who kill in the name of Islam?