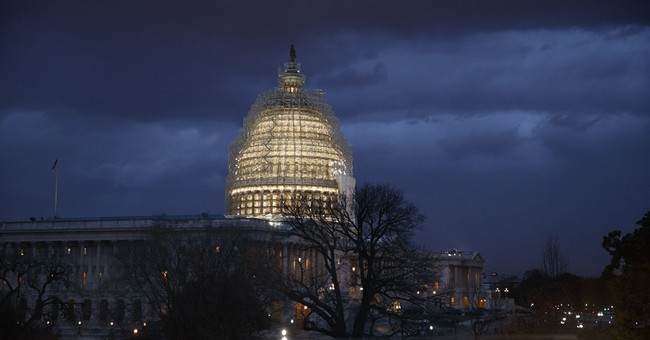 Now that Republicans control the Senate, President Obama can no longer hide behind Senate Majority Leader Harry Reid (D-NV). He is going to have to start vetoing some bills in order to protect his existing government expansions. But he can't veto everything.

1. Tax Extenders: On December 19th, Obama signed the Tax Increase Prevention Act, which retroactively extended more than 50 tax credit programs worth almost $42 billion from January 1, 2014 through December 2014. The credits will again expire on New Year's Day 2015, so there will be some pressure on Congress to renew them again right away.

However, Congress has routinely retroactively extended these tax breaks before, and the Internal Revenue Service continues to operate as though they will do so again for 2015, so there will not be a lot of pressure to get this done right away.

2. Department of Homeland Security: The CRomnibus, signed by Obama, on December 16th, funds every agency of the federal government, except the DHS, through September 30th, 2015. But the bill only funds the DHS through February 28th.

House Republican leaders have promised conservatives that they will attach a rider to the DHS funding bill, that will prevent the agency responsible for carrying out Obama's amnesty, the office of United States Citizenship and Immigrations Services, from issuing the work permits Obama promised illegal immigrants. Obama has promised to veto any DHS spending bill that has such a provision. Someone will have to cave.

3. Debt Limit: On February 15th, 2014, Obama signed the Temporary Debt Limit Extension Act, which raised the Treasury Department's borrowing limit through March 15, 2015. The Treasury Department is usually able to fudge some accounts and extend debt limit deadlines, and experts say they should be able to extend this deadline too, possibly all the way through August.

However, considering that Republicans got virtually nothing from Democrats when the debt limit was raised in February, it is highly unlikely Republicans will get anything from Obama in 2015.

4. Doc Fix: The Balanced Budget Act of 1997 created a cost saving mechanism for Medicare called the Sustainable Growth Rate. The law was designed to slow Medicare spending growth by cutting the payments doctor's receive from Medicare. But Congress has routinely undone these cuts and the latest Doc Fix prevented a 25 percent cut in doctor Medicare payments for 2014 at a cost of $21 billion. These cuts are scheduled to, again, take place starting March 31, 2015.

But just like the IRS ignores the expiration of certain tax extenders, the Health and Human Services Department has continued paying doctor's their expected rate despite inaction from Congress. But HHS can only do this for so long. Sometime around the end of March Republicans will have to find a way to pay for another Doc Fix. Since Congress and Obama would need to agree on a pay-for, either through a spending cut or a tax hike, a long-term fix to the problem is highly unlikely.

5. Budget: Congress is obligated by law to pass a budget by April 15th and, thanks to the most recent Obamacare challenge to reach the Supreme Court, King v. Burwell, this year's battle will be particularly dramatic. If the Court sides with plaintiffs, and finds Obamace insurance subsidies to citizens of states that did not establish health exchanges unlawful, then millions of Americans, mostly in red states, will have to pay full price for expensive Obamacare insurance.

Republicans will want to have a bill ready to fix this problem, and they will want to avoid a Democratic filibuster in the process. They can do this by including instructions in the budget directing one or more committees to pass legislation that changes tax or entitlement programs (like Obamacare) to meet the budget's tax and spending targets. Majority Leader Mitch McConnell (R-KY) would then be allowed to pass changes to Obamacare by a bare majority. None of this guarantees Obama would sign Republican changes to Obamacare, but it does neutralize Democrats in the Senate.

6. Highway Bill: The ten month extension to the Highway Trust Fund signed in August 2014, is set to expire at the end of May 2015. Republicans say they want to find a long-term solution to the HTF's funding problem, but finding a pay-for will be difficult. Democrats want to raise the federal gas tax and they may be emboldened by falling gas prices to force the issue on Republicans. Republicans will fight any effort to raise taxes at the federal level and will instead look to cut non-highway spending out of the HTF which current spends billions on mass transit programs which do not pay into the program. Cuts could also come from other areas of the federal government as they did in 2014 when the deal was funded by "pension smoothing" for federal workers, a one-time gimmick.

7. Export-Import Bank: Conservatives have been trying to kill the Export-Import Bank for generations, including President Reagan who proposed shrinking the corporate welfare program by a third. The bank was due to expire this past fall and corporate lobbyists desperately tried to attach a long-term authorization to the mast-pass government funding bill set to expire at the same time. House Republicans punted on that fight, however, reauthorizing the bank only through the end of June, while funding the federal government through the end of September.

Now corporate welfare advocates must either find another vehicle to attach Export-Import Bank reauthorization to (the Highway Trust Fund, Doc Fix, and DHS funding bills are all strong possibilities) or reauthorize the program by itself.

8. Appropriations/Continuing Resolution: Since taking over the House in 2010, Republicans have tried to pass all 12 appropriations bills needed to keep the federal government running, but they have never quite gotten the job done. But now that a Republican controlled Senate may actually take up their work, the exercise is no longer symbolic. It will be a heavy lift, but Republican controlled committees could get their work done before the September 30th deadline. If they don't Obama and congressional Republicans will have to agree on another continuing resolution or omnibus spending bill for fiscal year 2016.

9. Tax Reform: There is no deadline attached to the issue, but both Republicans and Obama have repeatedly said there is an opportunity to pass tax reform in 2015. The sticking point, as always, will be revenues. Obama is still insisting on higher revenues from both corporate and individual tax reform to pay for higher spending, specifically he wants higher revenues from corporate tax reform to pay for higher infrastructure spending. As long as Republicans stick to their pledges not to raise taxes, any compromise on this front remains unlikely.