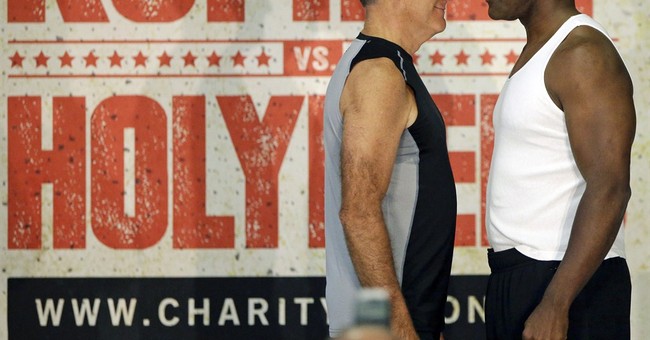 I first wrote about this when the fight was announced nearly two months ago, but today's the day: Mitt Romney will box Evander Holyfield tonight in Utah to raise money for CharityVision.

Mitt Romney and Evander Holyfield square off at the weigh-in before tomorrow's "fight" for charity in Salt Lake City pic.twitter.com/WUVFBrjgDG

In a pre-fight interview with the New York Times Romney revealed that his fighting style will be rather unorthodox, but his personal fashion style game will be on point.

Will you get in Holyfield’s face and talk trash?

I will get in Evander’s face with compliments and good humor. I want to keep him very happy and very friendly.

Will you actually wear trunks in the ring?

I was affectionately known as Bird Legs during high school. I’m afraid the bird legs will be unveiled one more time. But I’m very pleased that Under Armour has agreed to sponsor the bout. They have graciously sent me their apparel items, which I will avail myself of.

So you will be sufficiently covered. It will be a modest performance.

It will be a modest performance in more ways than one.

Yes, I would expect.

We will come in tuxedos. Then I will change. My son has procured a red silk robe complete with hood. And I’ll have red silk shorts.

Like I said before, good on Romney for (likely) making a fool out of himself for a good cause.