McConnell Up By Five in Latest Poll 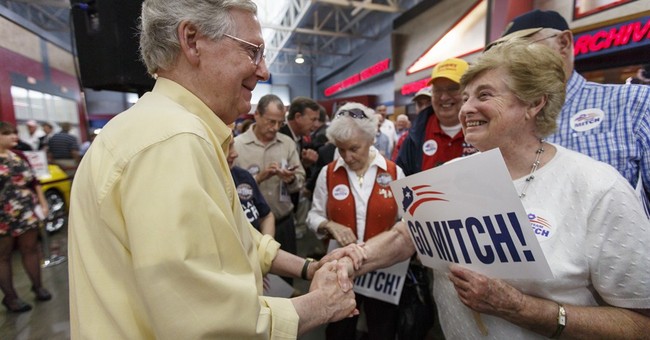 A new poll out of Kentucky is showing incumbent Sen. Mitch McConnell (R) with a solid lead as Election Day draws near. McConnell's lead has expanded from polls earlier this week, and he now leads by five points over Democrat Alison Lundergan Grimes.

The latest poll of 597 likely voters in Kentucky was conducted by SurveyUSA between Oct. 25 and Oct. 29 on behalf of the Herald-Leader and WKYT-TV in Lexington and The Courier-Journal and WHAS-TV in Louisville. It has a margin of error of plus or minus 4.1 percentage points.

In a Bluegrass Poll released early last week, McConnell was clinging to a one-point lead, with 44 percent backing him and 43 percent choosing Grimes.

McConnell is leading among both men and women, and although the GOP base has been critical of him throughout the election cycle, 86 percent of Republicans polled said they plan on voting for him. This is certainly a good thing. On the other side of the aisle, Grimes base may be turning on her--only 71 percent of Democrats claim that they will vote for Grimes, and an astounding 23 percent of Kentucky Democrats intend on voting for McConnell.

Grimes came under fire when her supporters said that she was lying about her support of the coal industry, and when she refused to confirm whether or not she voted for Obama. The DSCC briefly pulled money and ads from Kentucky, but eventually returned.

Our poll tracker has shown McConnell with a slight, but consistent, lead for most of the race: