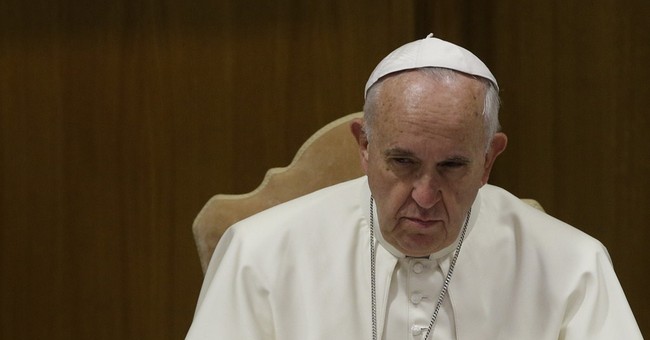 Look whose byline is leading the front page of @msnbc ... pic.twitter.com/FclNELJTdL

No, MSNBC, Pope Francis has not "gone rogue."

Let's compare the statements of Pope Francis yesterday with those his predecessor Pope Emeritus Benedict XVI in 2007. I'm not sure that "going rogue" means "saying the exact same thing as all of your predecessors," but then again, I don't work for MSNBC.

God “created human beings and let them develop according to the internal laws that he gave to each one so they would reach their fulfillment,” the pope said. “Evolution in nature is not inconsistent with the notion of creation, because evolution requires the creation of beings that evolve.”

“They are presented as alternatives that exclude each other,” the pope said. “This clash is an absurdity because on one hand there is much scientific proof in favor of evolution, which appears as a reality that we must see and which enriches our understanding of life and being as such.”

He said evolution did not answer all the questions: “Above all it does not answer the great philosophical question, ‘Where does everything come from?’”

Shoot, for funzies, let's go further back and find another quote about evolution from prominent Catholic leaders.

Before offering a few more specific reflections on the theme of the origin of life and evolution, I would remind you that the magisterium of the Church has already made some pronouncements on these matters, within her own proper sphere of competence. I will cite two such interventions here.

In his encyclical Humani Generis (1950), my predecessor Pius XII has already affirmed that there is no conflict between evolution and the doctrine of the faith regarding man and his vocation, provided that we do not lose sight of certain fixed points.

And here's the direct quote from the encyclical that he was referring to:

36. For these reasons the Teaching Authority of the Church does not forbid that, in conformity with the present state of human sciences and sacred theology, research and discussions, on the part of men experienced in both fields, take place with regard to the doctrine of evolution, in as far as it inquires into the origin of the human body as coming from pre-existent and living matter - for the Catholic faith obliges us to hold that souls are immediately created by God.

Wait, what? The Church published an encyclical 64 years ago saying exactly what Pope Francis said yesterday? You don't say!

The media clearly adores Pope Francis, which I'm okay with. It's nice to have positive media coverage of my faith. I'm not okay, however, with them twisting the pontiff's words and claiming he's "gone rogue" when he has done no such thing. Pope Francis has not changed any Catholic doctrine. Period.

Annnnnd while I'm on a roll, can anyone name the common theme between these scientists? Gregor Mendel (the father of genetics), Nicolaus Copernicus (heliocentric universe), Georges Lemaître (the man behind the Big Bang Theory), and Jean Picard (first to accurately measure the size of the earth)?

They're all Catholic priests.