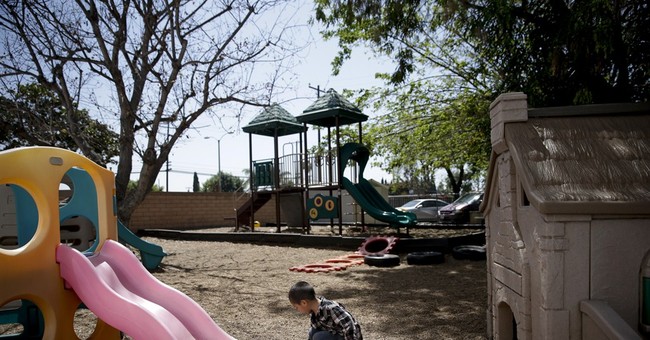 According to a new Reason/Rupe poll, an astounding 68 percent of Americans surveyed said that it should not be legal for children under the age of nine to play outside unsupervised. A smaller, yet still sizable, percentage of people surveyed agreed that 12-year-old children should also not be allowed to be outside unsupervised.

A whopping 68 percent of Americans think there should be a law that prohibits kids 9 and under from playing at the park unsupervised, despite the fact that most of them no doubt grew up doing just that.

What's more: 43 percent feel the same way about 12-year-olds. They would like to criminalize all pre-teenagers playing outside on their own (and, I guess, arrest their no-good parents).

Growing up in Maine, I spent a decent amount of time outside by myself as a child without parental supervision. I went sledding and ice skating without my mother hovering over me—way before I ever had a cell phone. I biked through the neighborhood without parental guidance. I babysat children starting around age 11. Nobody died.

Parents should be trusted to know what's best for their children. Crime rates are at their lowest in decades, and arresting parents for letting their children play unsupervised is doing nothing but waste valuable police time. Society needs to lighten up a little, and these poll numbers are very troubling.