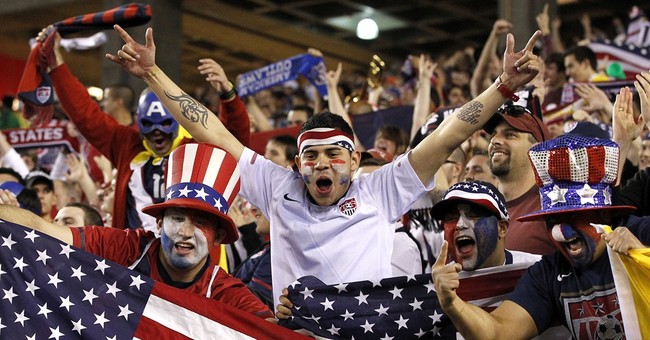 Earlier today, Pelosi's official Twitter account tweeted the following tweet showcasing members of the United State's Men's National Soccer Team, who yesterday opened up the 2014 FIFA World Cup with a victory over Ghana. Pelosi captioned the image "Immigrants help drive America's success, even in the World Cup! Look at what #USMNT would be without them. #TimeIsNow." The hashtag "#TimeIsNow" refers to the representative's push for immigration reform.

Immigrants help drive America's success, even in the World Cup! Look at what #USMNT would be without them. #TimeIsNow pic.twitter.com/D550KRnc7W

While the world of sport is no stranger to inspiring stories of immigrants succeeding and winning medals for their adopted countries, the members highlighted in the tweet are all natural born citizens of the United States. While five members of the team were born and raised in Germany, four of those are the sons of U.S. servicemen who were stationed there and were granted U.S. citizenship at birth because at least one of their parents is an American citizen. Another, Mix Diskerud, was born to an American mother in Norway. The others featured in the tweet are first-generation Americans who were all born on U.S. soil, making them U.S. citizens by default. They are not immigrants and never had to undergo a naturalization process—their parents did. To imply that they personally are immigrants is, at best, a misunderstanding, and at worst, offensive.

From Pelosi's odd definition of immigration, technically only Chris Wondolowski can truly claim to be "American," as he is the sole member of the team to be a member of a Native American tribe.

Nobody is discounting the benefits and gifts that legal immigrants bring to a country. This tweet, however, is a bad attempt to politicize a soccer team. Not cool, Pelosi.