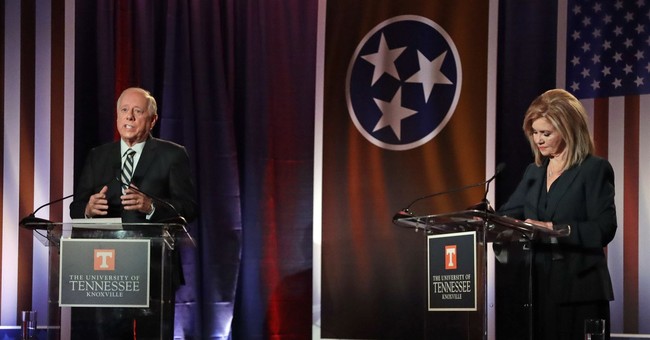 In 2015, Mark Brown —who now works as communications director for local Democrats’ “Tennessee Victory 2018” project — posted on Facebook that “white male ‘Murican gun nuts” were “the biggest terrorist organization on the planet, according to screenshots from the Washington Free Beacon.

Previously, the Beacon also reported on a multitude of other past social media posts from Brown. Among other colorful comments, the Democratic spokesman regularly lashed out at President Trump, calling him a “racist…f*ckstik [sic],” a “#F*ckingMoron,” an “insane f*ck,” and “Putin’s b*tch,” while also attacking America and evangelicals as “racist” and Trump voters more specifically as “idiots” who cannot be reasoned with. Most of those comments came from Twitter posts which have since been systematically deleted from Brown’s account.

More recently, over this past weekend, Brown was forced to admit that he had lied to a local press outlet about Project Veritas’s recent undercover tapes showing Bredesen campaign staffers confessing that the Democratic Senate candidate’s openly pro-Kavanaugh position was calculated to win over “dumb” and “ignorant” Tennessee voters. Brown had falsely claimed to local TV station FOX 17 that the people caught on video by Project Veritas were just “college students and youth organizers” spouting “uninformed and speculative comments” about Bredesen’s thought process.

However, when FOX 17 reporter Harriet Wallace confronted Brown with Federal Election Commission documents proving that they were not simple volunteers, but paid and professional Bredesen staffers, Brown fibbed again, telling Wallace that he was not “attempting to mislead anybody” and had been labelling random non-speaking people walking around in the background of the videos as the young volunteers.

In spite of this recent history of clear deception and vicious mudslinging, Brown continues to work for Tennessee Victory 2018. In a piece published on Monday for the Chattanooga Times Free Press, Brown was quoted going after Bredesen’s Republican opponent Rep. Marsha Blackburn as a liar:

"After 16 years in the Swamp, Tennessee voters can't trust Congresswoman Blackburn to tell the truth on any issue, including guns," said Mark Brown, Tennessee Victory 2018 spokesperson. "She will say anything or do anything in her desperate attempt to hang on to power."

Needless to say, Brown’s behavior is quite at odds with Bredesen’s constructed campaign persona as a moderate, pro-gun Democrat willing to work across the aisle with Republicans.

Despite the political damage that Brown’s continued association with Bredesen might ultimately cause, the Senate hopeful has previously refused to disavow his party’s spokesman when some of the above-mentioned past comments were first reported on. According to the Tennessee Star:

Brown, who has been promoting Bredesen’s campaign in his role as a spokesman for the Tennessee Democratic Party, in the past has tweeted “f*** ‘reaching out’ to Trump voters. The idiots aren’t listening.”

The Tennessee Star reached out to the Bredesen campaign to ask if the former governor disavowed the Tennessee Democratic Party spokesman Mark Brown, or his foul-mouthed comments about the 1.5 million Trump voters in Tennessee.

The Bredesen campaign did not respond.

Based on this prior reticence to renounce Brown’s views, Bredesen seems likely to hold onto the vituperative spokesman until election day.