Scott Walker Has a Stark Warning Ahead of Midterm Elections 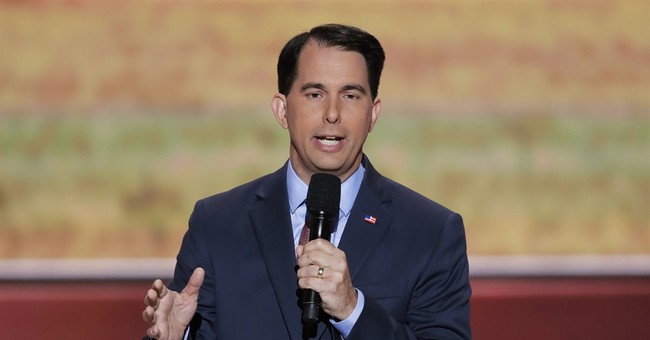 Wisconsin Gov. Scott Walker (R) is known as a strong fiscal conservative who has led the fight against special interests and large organized labor unions in his state. Now, Walker has a stark warning ahead of the midterm elections in November: a blue wave is definitely possible.

During Speaker Paul Ryan's annual Fall Fest on Saturday, Walker took the opportunity to remind the audience of one hard truth: Republicans are in great danger, BuzzFeed News reported.

Walker referenced a poll from Marquette Law School that shows his Democratic opponent leading 49 to 44 percent. This same poll at this point in 2016 showed Sen. Ron Johnson (R) down by six points. He eventually won his reelection by three percentage points.

Part of the struggle Walker and other Republicans are facing this November is the anti-Trump, anti-incumbent sentiment amongst voters. Now that Americans have the taste of someone who isn't a political insider (Donald Trump), they're wanting more candidates who embody that quality.

The one thing working against Walker: Ryan's retirement and Reince Prebius no longer being at the Republican National Committee. The Republican powerhouse in Washington is dwindling. And Walker is the only one remaining.

Speaker Ryan, who is retiring at the end of the year, reflected on the political makeup of Wisconsin, remembering a time when his seat was a Democratic stronghold. “We cannot allow this complacency to occur,” he said. “I’ve watched this state and this district and this party come from a small minority.”

Saturday wasn't the first time Walker shared a growing concern about the Blue Wave taking place in the Badger State. Back in April, he shared a series of tweets about what the GOP in Wisconsin was facing. After all, in a special election in January, 17-year sitting incumbent Sen. Sheila Harsdorf lost her seat to a Democrat. Then, in April, Rebecca Dallet won a seat on the state Supreme Court. Dallet's win was a huge blow to conservatives. It was the first time in 23 years that a liberal challenger won a seat on a high court.

Big government special interests flooded Wisconsin with distorted facts & misinformation. Next, they'll target me and work to undo our bold reforms. We need to keep moving #WIForward & make sure a #BlueWave of outside special interest money doesn’t take us backward.

Wisconsin is working with RECORD-LOW unemployment thanks to our reforms, but the risk of a #BlueWave puts everything in jeopardy – balanced budgets, collective bargaining reforms, $8B in tax cuts, welfare reform & more.

We have a positive story to tell & we need conservatives to take action and stop a #BlueWave by getting out there and telling it. Volunteer to share our optimistic plan for the future here: https://t.co/PLjD3aaaU5

If you support our bold efforts to help families and reform government, I need your help right now. CHIP IN $5 and help us stand against the flood of outside money that is headed our way: https://t.co/sEXb5qCLyZ

The one thing Walker has going for him: cash. He started September with $4.1 million in the bank, more than twice as much as his Democratic opponent. And Americans for Prosperity-Wisconsin recently spent $1.5 million on a third ad campaign to help protect Walker. AFP has spent $4.6 million since the August Primary, the Chicago Tribune reported.

Democrats, however, see Walker's seat as an opportunity to take down a Republican incumbent.

According to Jared Leopold, a spokesperson for the Democratic Governors Association, Walker is spending nearing $8.5 million this year but doesn't have the polling lead to match his capital.