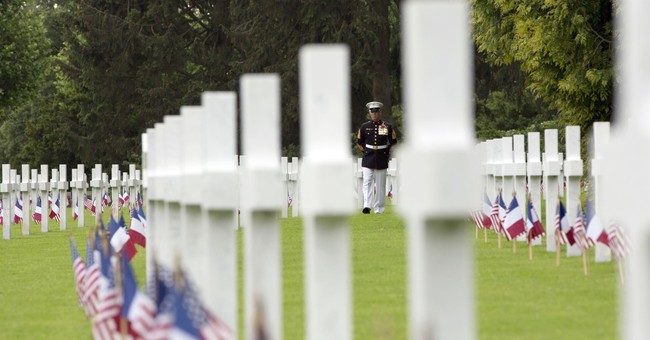 Unfortunately, to many, Memorial Day translates to “an extra day off from work” and not much more. But thanks to a viral photo from an Atlanta Braves baseball game, Americans are being reminded of what the day is really about.

In the picture, which has since been retweeted more than 5,000 times, a Parkview High School U.S. Marine Corps JROTC member is seen standing at attention, in the rain, beside the stadium’s POW-MIA Chair of Honor. Next to him, a fan in a red raincoat holds an umbrella over his head to shield him from the weather.

Another attendee also caught the heartwarming gesture on camera.

They sacrifice so much for us, we can sacrifice for them too!!! #RespectOurMilitary pic.twitter.com/hOHuc3zLGH

The POW-MIA Chair of Honor was installed last year in SunTrust Park to commemorate all the American soldiers who have been unaccounted for since World War I.

Next to the empty seat sits a plaque which reads: "Since World War I, more than 92,000 American soldiers are unaccounted for. This unoccupied seat is dedicated to the memory of these brave men and woman and to the sacrifices made in serving this country."

Some gave all. #MemorialDay pic.twitter.com/lygDsksoRz

The picture of the dedicated JRTOC member and compassionate fan was taken during a recognition ceremony during the game’s third inning.

The young man wasn't the only JRTOC member to offer his respects that day, either.

This is what patriotism is all about..Respect!!

My heart swells with pride.