No, President Trump Did Not Condone Sexual Assault With His Morning Tweets 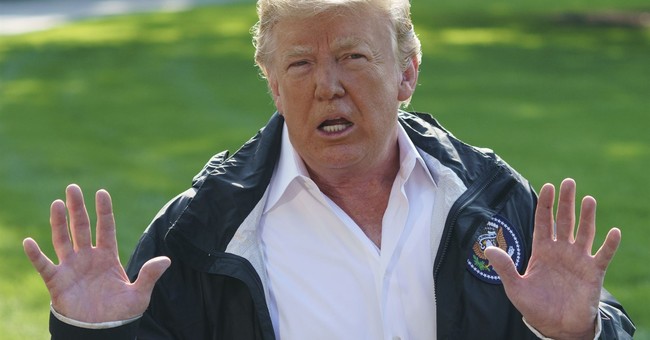 As Congress begins to investigate Dr. Christine Ford's allegations of Judge Brett Kavanaugh sexually assaulting her more than 30 years ago, people on both sides of the aisle are chiming in. In fact, a campaign launched on Twitter after President Donald Trump inferred that Ford's allegations are coming out at a rather convenient time:

People were upset by Trump's words, which turned into the #WhyIDidntReport campaign, where sexual assault survivors explain the reason they didn't repeat their attackers.

Leftist groups and blue check mark Liberals quickly took over the hashtag, just as they did with the #MeToo campaign.

The Women's March were quick to place blame on President Trump and "men like him."

• There are too many of these stories.

• Too many of us have these stories.

• Too many of us have never felt safe to share them.

Various celebrities also explained why they never reported their assault:

Because I had never seen a survivor come forward and be treated with dignity, so why would I believe my case would be different? #WhyIDidntReport

Some celebrities also explained why they didn't report their multiple attackers:

I was 7 the first time I was sexually assaulted. He was a relative of my mom’s second husband. I told my folks and they sent me away. #WhyIDidntReport

The second time I was 16 years old and a virgin. He was my boyfriend. "Date rape" wasn't discussed in the 80's. I was horrified and ashamed. #WhyIDidntReport

The third time I was assaulted I was 23. I thought that no one would believe me, because no one wanted to stand up to him. I had seen the way Anita Hill was treated when she came forward. #WhyIDidntReport

Various Congressional candidates also felt it was important to share their reasoning;

I did report, but it was dismissed by the police. I know what it is like. I understand the shame and humiliation and why people don’t report. Women deserve to be treated with the dignity that is due to every human being. #WhyIDidntReport

I have experienced sexual assault multiple times and in different ways – I never reported and I know how hard it is for somebody to come forward. I also know that many women are in the same place.

It is not your fault. You deserve to be heard. We believe you. #WhyIDidntReport pic.twitter.com/We5V7LCNhp

Because I was 8 and someone came up behind me in a swimming pool and stuck their fingers inside of me. I never saw a face. I had no idea what to say. #WhyIDidntReport

The fear of being blamed was one common theme.

I was 19. He was a friend at a date party. I blacked out on the bus home. Came to in bed. He was sobbing over what he’d done. I consoled him tho I was too injured to walk. Our friends blamed me. I flew home from college. 18 yrs later I’m still ashamed. #WhyIDidntReport

I was only 15 and scared nobody would believe me. Or worse,would blame me.

I was scared he would do it again if I told anyone.

It was (and still is) humiliating to recount such profoundly sexual, violent details.

I didn't want to break my parents' hearts.#WhyIDidntReport

#WhyIDidntReport I was raped at 7.Rapist said Hell's Angels would kill my family if I told. Sexually assaulted by my professor, 19; thought I would be raped again. Waited 20 yrs then told Yale, NYMag. Yale later killed a job offer. I tried to file grievance re all.Yale sent cops.

#WhyIDidntReport Because I was embarrassed I “let” it happen to me.

Then there were those who were never victims but felt the need to voice their concern and disbelief.

Trump says that if the attack on Christine "was as bad as she says" she would have told her parents & authorities would have investigated. But #WhyIDidntReport shows what happened to victims spoke up.

For the president to sink any lower, it would have to involve plate tectonics.

How is it possible that people are still surprised by what women are sharing here? If you are appalled, surprised, or doubtful ask yourself why it’s so important to hide from the truth of women’s lives and the knowledge it brings about our society #WhyIDidntReport

#WhyIDidntReport heartbreaking
I've heard this 100s of times
Some because:
1??who would believe me? - I did
2??I blame myself - it's never your fault
3??Auths wont take it seriously - I did & they will
4??Rapist is powerful - Truth is stronger

Recommended
Yes, What The Japanese Are About to Do...Is How We Got Godzilla
Matt Vespa

When I was in college I was "date raped. It was the most painful and confusing time of my life. Here I was, on my own for the first time, trying to make sense of the world as an adult and I had my innocence taken from me. I was confused about what happened. I thought I somehow allowed my attack to happen despite the fight I put up. I was ashamed to talk about what happened. It was embarrassing. If I reported what happened it meant I had to accept that I was a victim — and I never wanted to think of myself that way.

Going through the legal process of reporting was difficult. I was berated, questioned over and over. I had to repeat my story multiple times, to multiple people and then write it in detail. I had to go through various STD testing and examinations. I had my dorm room searched. I felt like I was the one who committed a crime, not the other way around.

It's important to make victims feel like they're heard and that justice is being served. What President Trump said is NOT condoning sexual assault. What he's bringing up is one thought that can't be pushed away: was Dr. Ford really assaulted or is she trying to derail Kavanaugh's confirmation simply because she doesn't like him or disagrees with him politically? Is Dr. Ford being opportunistic? If not, why didn't she bring this up before, at any other point in time? Asking those questions does NOT mean Trump is making excuses for Kavanaugh or any accused rapist. It means he's pointing out the obvious question and is wanting Congress to dread lightly.