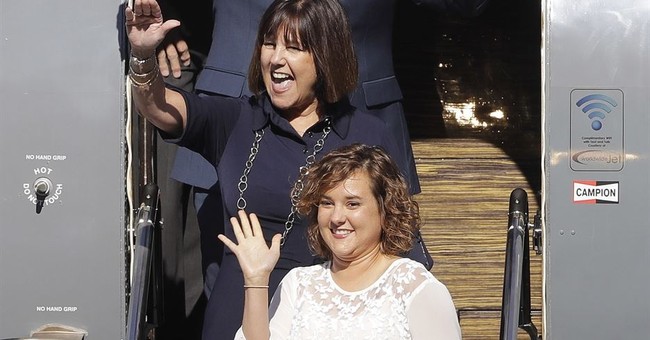 Second Lady Karen Pence and her daughter Charlotte Pence have given readers a glimpse into what a day in the life of a vice president is like - through the eyes of their pet bunny. They chatted with Townhall this week about their new book, Marlon Bundo's Day in the Life of the Vice President.

Both of the Pence women were able to exercise their talents for the project, they shared with Townhall on Monday. Charlotte, who wrote the poetry in the book, has been "writing for as long as she can remember." She studied screen writing and creative writing in undergrad and described it as a definite "passion" of hers.

For Karen, painting is something that she loves to do, although the past year most of her artwork consisted of Marlon Bundo watercolors.

The book is intended for children, but I wondered if it also gave the Pences a chance to show off a bit of their personality.

"In the beginning, we just thought it would be a fun thing," Mrs. Pence said. "Then the more she changed her idea, I think she realized this would be an educational book because a lot of people don’t know what the vice president does. The last few pages can serve as a study guide for teachers to go through some of the facts about the vice president’s job."

Charlotte admitted that she didn't even know really know what a vice president does, until her family jumped into the role.

"I don’t think I knew that much about the official duties of the vice president either really until our family was in this role," she shared.

Charlotte gushed about being able to join her family on some pretty amazing international trips and meeting people from all other the world. She served as a sort of adviser to her father, helping him with speech prep or sitting in on meetings. Mrs. Pence, too, says representing the United States on a global scale has been the most thrilling part of her new gig.

"For me, I can say, biggest honor was last February when I got to lead a delegation to the special Olympics in Austria," she recalled. "I don’t know how anything will ever top it. It was pouring down, freezing rain and they didn’t care. They sang along, it was really moving."

Another perk has been getting to know the Trump family.

"We’ve gotten to know their family pretty well when I was on the campaign trail," Charlotte explained. "We got to hang out with the Trump children and grandchildren. "They're a very big, close family and we are as well. We all just meshed really well together."

In case you're wondering, Marlon Bundo will be joining the Pence women on the book tour. But, don't expect to pet or hold him.

"He’s very tame, but if he had a lot of people around him, he gets nervous," Mrs. Pence explained.

The 4-5-year old bunny will be keeping to his cage and new little travel bag.