Young Voices Contributors
|
Posted: Jan 18, 2017 12:01 AM
Share   Tweet
The opinions expressed by columnists are their own and do not necessarily represent the views of Townhall.com. 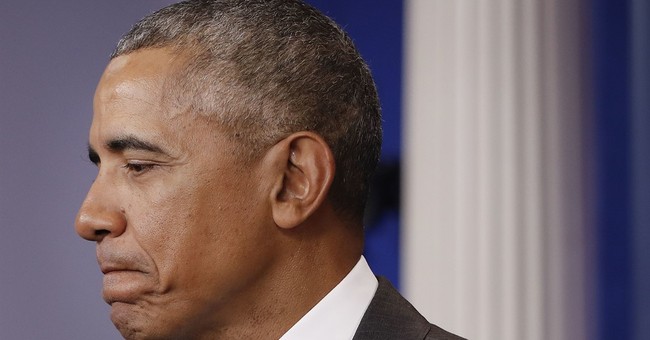 Editor's note: this piece was authored by Alex Grass.

Politico recently ran a piece by Bill Scher on the 1980s miniseries Amerika, a program that depicted a Soviet puppet government installed in the US “after a sham election in which both major party candidates were Soviet stooges.” Scher’s dystopian piece compares Amerika to the election of Donald Trump, hysterically rhapsodizing about “American conservatives with a nationalist, and even authoritarian, bent like Donald Trump [who] are not unnerved by the prospect of Russian influence over the U.S. government.”

Scher’s hysterical tone conveys exactly what the highly distrusted left-media means it to, namely that Trump is an illegitimate aberration whose every move must be thwarted. The fourth estate recoils at the effectiveness of Trump’s Twitter bully pulpit, and recognizes that the formerly dominant “media gatekeepers” might soon be settling into a diminished role. Despite the fact that Obama is the one who doggedly pursued media whistleblowers, Trump’s non-cooperation with news outlets who despise him—ditching the press pool time and again—has been labeled “a dangerous precedent.”

Astute observers will recognize that the controversy about Russian meddling in the election has more in common with Wag the Dog, a film in which the president’s PR men fabricate a foreign policy crisis as a means of distracting from the commander-in-chief’s sex scandal, than it does with Amerika.

Of late, Barack Obama has done his damnedest to politicize the intelligence community and escalate tensions with Russia to distract from this conclusion from the Intelligence Community Assessment on Russian hacking: “DHS assesses that the types of systems Russian actors targeted or compromised were not involved in vote tallying.” The left-wing calumny that Russia changed the results of the election simply can’t be substantiated.

This triangular quarrel between Trump, Russia, and the media is a touch more complicated than just the technological revolution of communications. That there is an opportunity for a new-generation détente with Russia doesn’t mean Senator McCain’s assessment of Putin was wrong when he said: “I looked into Mr. Putin’s eyes and I saw three things … a K and a G and a B.” Still, the Obama administration’s eleventh hour foreign policy maneuvers, such as sending troops into Lithuania and sanctions against Russian officials, aren’t foreign policy maneuvers so much as they are support plays for a traditional media on life support.

How does one distinguish between Obama supporting the media’s Russia narrative and a foreign policy strategy carried out in earnest? Consider how inconsistent Obama’s recent moves are with those he’s made in the past.

Obama wasn’t inclined to brinkmanship when Russia first annexed Crimea. If there was an appropriate time to push back against Russian aggression it was probably during 2014. And all of Obama’s other international shambles—Ukraine, Syria, Iran, and so on—aren’t particularly strong evidence of a man inclined to use force. It’s also questionable whether a nation in decline, as Russia is, presents such an emergency that Obama must initiate another Cold War in his last two weeks in office. Neither is the response to Russia’s hacking proportional to the offense. A better and more appropriate response would be something close to Professor Jeremy Rabkin’s proposed enlistment of privateers for retaliatory cyberattacks against bad actors, a sort of modern-day revival of letters of marque and reprisal.

What can Trump do in response? Concerning the Obama-sponsored news fracas and future quarrels with the media, he can continue to bypass the big networks and appeal directly to the people as he did with his transition update. Further, Trump can continue to call the media to task for their more outrageous prevarications, as he did when he acted as a “f---ing firing squad” aimed at Jeff Zucker and other bigwigs in his first post-election news summit.

There is something in the way of schizophrenia, or perhaps hypocrisy, in the left-media’s transfiguration from a collection of stalwart anti-war activists into paranoid cold warriors. Then again, for them the stakes have never been higher. They can either fight Trump tooth and nail for narrative control or confront a future of irrelevance and obscurity. Which do you think they’ll choose?

Alex Grass is a Young Voices Advocate and a student fellow at the Floersheimer Center for Constitutional Democracy. He lives in Brooklyn with his wife Gina, and his two children, Joseph and Lucia.