Young Voices Contributors
|
Posted: Jan 27, 2018 12:01 AM
Share   Tweet
The opinions expressed by columnists are their own and do not necessarily represent the views of Townhall.com. 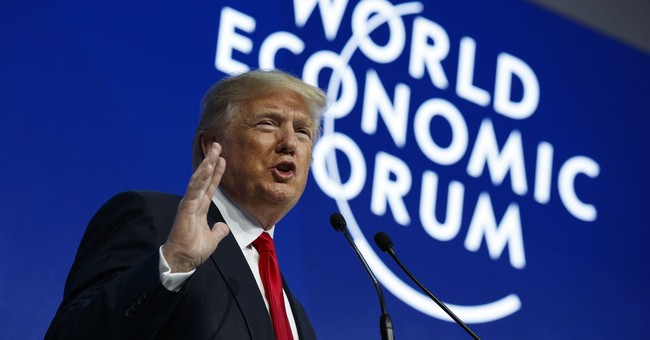 It’s time for the World Economic Forum once again, when a subset of the world’s rich elite meet in Davos, Switzerland for a luxurious few days of self-congratulations, while they lampoon another subset of the rich elite for all global problems. The festivities as usual are heralded by the Oxfam report on global inequality, this year entitled “Reward Work, not Wealth.”

Oxfam calculates, using a data set provided by Credit Suisse, that 42 people own 50 percent of the world’s total wealth. From this and other insights about the top 1 percent, such as their collective ownership of 82 percent of global assets, they produce a series of interventionist policy prescriptions, including limiting shareholder returns, caps on executive salaries, increasing crackdown on tax havens, and huge increases in the tax burden of the wealthy. Policy makers should take Oxfam’s findings and suggestions with a grain of salt, however, since even after repeated criticism year after year, the report remains methodologically sloppy.

Their calculation of inequality is based off “net assets” in which the assets owned by individuals, such as property and shares, is subtracted by their debt liabilities, to calculate their position in the global wealth distribution. Income is excluded from the calculation. One of the most intuitive problems with this is that the poorest people by this method are not those in developing countries living with little to nothing, but young professionals, who own no assets with a significant degree of student debt. It seems absurd to believe that a Harvard graduate in his first job, with a steady income, is somehow worse off than those living with little debt in Sub-Saharan Africa or Southeast Asia, simply because he had to take out a loan for college.

To address this issue, Oxfam compiled another statistic in which they removed those in net debt from the calculation to find that the wealth of 128 billionaires equalled the bottom half of the world’s population. This is a backhanded way of addressing the problem with their statistics. If this inequality calculation does not capture the quality of life that individuals live, and instead relies on removing those who are doing well in reality from its calculation, it does little more than serve Oxfam’s ideological bias.

While not responding to these more substantial criticisms of their methodology, Oxfam did update their data set for the 2018 report. In 2017, Oxfam claimed that just eight people controlled half of global wealth, as opposed to today’s 42. With the new data set they revised the previous year’s findings to 61 people, and stated that the trend of "widening inequality" persists. This data revision provides another clear signal that Oxfam’s findings should not be taken at face value. Policy prescriptions were made last year with a widely inaccurate data set, which suggests that the policy prescriptions made now are similarly incomplete.

Issues like these persist throughout Oxfam’s work. Individual data, for example, does not capture family assets nor the pension claims that one has. Oxfam’s “An Economy for the 99%” briefing paper tried to dismiss claims that pension funds act as institutional investors for the average person by claiming “even in countries where pension funds are significant institutional investors, in effect sharing the returns with pensioners, their share of these lucrative assets has been declining.” This is contrasted with the evidence that pension funds and liabilities represent a growing share of the global economy. Pension funds are rapidly expanding around the world, according to research by Willis Towers Watson, with China having the fastest growth rate. In 22 major markets, investments made by pension funds account for 62 percent of their collective GDP. Ignoring this distorts the findings on the real ownership structures of capital assets.

It is clear that the Oxfam report is not of the high academic caliber worthy of the sort of media attention it generates, but the underlying problem of inequality is nonetheless real. The issues they raise with crony capitalism are ones with which people from all sides of the political spectrum can sympathize. Their solutions, however, are not.

Research led by economist David Autor from the Massachusetts Institute of Technology found that a significant degree of inequality can be explained by what is referred to as “superstar firms” such as Big Tech companies, who significantly outperform everyone else. This burgeoning field of research into superstar firms and their increasing market concentration shows that most inequality is not between bosses and their employees, but between those that work at superstar companies with smaller labour forces, and everyone else. Findings such as this lead to a much different policy solution than what Oxfam proposes.

Rather than increasing the scope of regulations that allows for special interests to capture policy, the focus should be on increasing competition and reducing barriers to market entry. The very cronyism that Oxfam rails against arises from the regulations that add high compliance costs, making it harder for smaller firms to compete. A more competitive market economy would increase prosperity and combat cronyism in a much more effective manner than the suggestions proposed by Oxfam.

Inequality is a real problem that requires attention and policy solutions. Shoddy research is just as real a problem that requires as much attention. The methods of Oxfam’s report obscure the reality of inequality which leads them to craft policy solutions that would hurt far more than they would help. A greater degree of intellectual honesty and methodological criticism is needed before Oxfam’s report can be taken seriously.

Ryan Khurana is a Research Fellow at the Institute of Research in Economic and Fiscal Issues, and a Visiting Scholar at the Cevro Insitute in Prague, Czech Republic. He is a Young Voices Advocate.