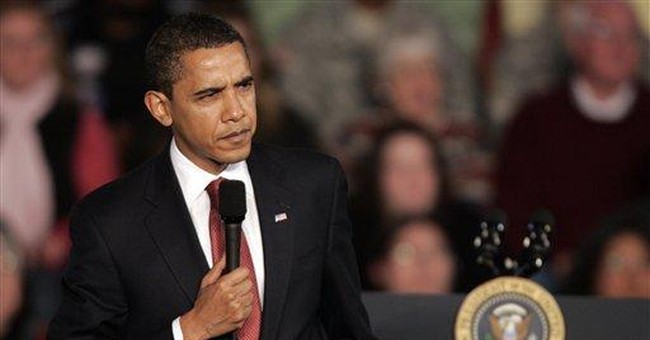 The American left had every reason to think that, in Barack Obama, it had finally succeeded in putting one of its devout disciples in the Oval Office. In the run-up to the presidential election, Obama made no secret of his disapproval of the Iraq war, or of his intention to pull American troops out of that venture. During the campaign, he at first pledged that he would end our involvement in 2009. Then he backed off a bit and has recently been talking about 16 months as an appropriate deadline.

More recently still, even that date has begun to wobble. Obama chagrined his supporters and delighted his critics by announcing that our ground commander in Iraq, Gen. Ray Odierno, will stay on in that position. Odierno is opposed to withdraw in 16 months. Furthermore, America's security pact with Iraq envisions our departure in about three years, and Obama recently told the press that the pact "points us in the right direction."

Finally, by announcing that he will retain Bush's secretary of Defense, Robert Gates, in that position, and naming former Marine commandant Jim Jones as his national security adviser, Obama is designating two well-known "hawks" for those critical posts. These are not the actions of a man who is planning to yank the rug out from Iraq any time soon.

So we seem to be encountering another example of the grand old rule that there's nothing like a brush with reality to induce sober reconsideration of ill-advised campaign pledges. Obama's only sop to his leftist supporters has been the appointment of Susan Rice as America's ambassador to the United Nations, arguably the emptiest high post within the gift of an American president. At Turtle Bay, she will have the unenviable task of explaining and defending, to the world's doves, the policies of her colleagues Gates, Jones and Odierno.

All this is incontestably good news for American conservatives. No doubt Obama will find many ways to disappoint us in the four years ahead, but it would be rank ingratitude not to acknowledge the occasions on which he moves in sound directions.

There is, after all, a world of difference between telling a ladies' club in suburban Chicago what they want to hear, and formulating policies for the world's only superpower in an international arena crawling with troublemakers who would dearly love to see the United States embarrassed and, if possible, toppled from its high perch.

After all, the significance of the Middle East doesn't reside in its mere act of acquiescence in a presumed American desire to throw its weight around there. The Middle East's oil is by no means vital to the United States. We have other sources of oil, much closer and far more dependable. But Middle Eastern oil is absolutely essential to other areas of the globe -- most notably Western Europe. If it were denied to them, their economies would grind to a halt in a matter of weeks. And the United States could not permit that. For one thing, the secondary effects on our own economy would be disastrous.

So Middle Eastern oil must continue to flow, for the sake of the whole world. It is perfectly understandable that there will always be troublemakers eager to upset this state of affairs. The local rulers, to take just one example, will always be on the lookout to increase their profits. And interested outsiders, like Russia and China, will always be tempted to meddle as a way of complicating life for the United States and Western Europe.

But everyone knows very well that this is one argument the United States and the West simply cannot afford to lose. If worse came to worst, the West would have no choice but to go to war to preserve the status. And not even our worst enemies want to us to push that far.