Tyrants: ‘Logic Is an Enemy … Truth Is a Menace’

Will Alexander
|
Posted: Jan 14, 2022 6:19 AM
Share   Tweet
The opinions expressed by columnists are their own and do not necessarily represent the views of Townhall.com. 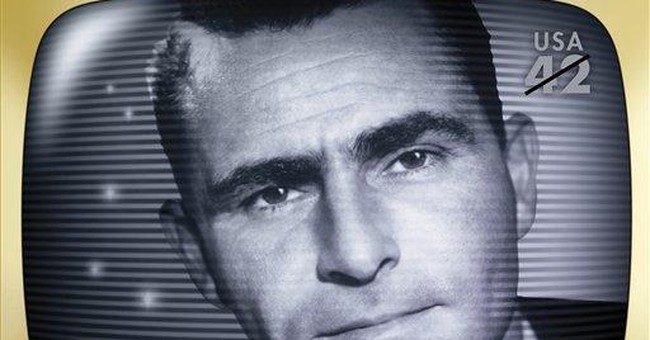 Instead of watching fireworks, my better half and I spent New Year’s Eve binge-watching a show that summed up the previous year:  The Twilight Zone.  One of the first episodes was “The Obsolete Man” (1961), about the trial of Romney Wordsworth, a librarian.

“Wordsworth! Romney! Obsolescence!” yelled one of two bailiffs standing at each side of two 20-foot-tall doors that slowly opened to reveal the condemned man entering the courtroom, head bowed.

Rod Serling, a master of words, sucked us in right away:

“You walk into this room at your own risk because it leads to the future.  Not a future that will be but one that might be.  This is not a new world, it is simply an extension of what began in the old one.  It has patterned itself after every dictator who has ever planted the ripping imprint of a boot on the pages of history since the beginning of time.  It has refinements, technological advances, and a more sophisticated approach to the destruction of human freedom.  But like every one of the super-states that preceded it, it has one iron rule: logic is an enemy and truth is a menace.”

Wordsworth walked with foreboding past a silent, zombie-like jury – “the board” – inside a bare, echoey courtroom.  He stopped in front of a long desk to face “the Chancellor” perched atop a towering judge’s bench.

Wordsworth was accused of two crimes for which he had been under mandatory investigation for a year:   He claimed to be a librarian after the State made books obsolete, and he believed in God after the State decreed that God did not exist.

“The State has proven that there is no God!” the Chancellor yelled into a courtroom microphone after Wordsworth forcefully challenged him: “You cannot erase God with an edict!”

Unable to speak anything but the truth, Wordsworth was found guilty.  The State declared him obsolete.  His sentence:  Death.   His last right:  To choose his method and precise time of death within the next 48 hours.

I remember watching this episode decades ago and being entertained by it as good fiction based on an almost cartoonish version of George Orwell’s fiction.  Never in my wildest imagination did I think something like The Obsolete Man could happen in America.

America, in 2021, entered a Twilight Zone.  Serling and Orwell could predict this “future that might be” because the naked clay used for their fiction was primal human nature – which never changes.  True to the relics of the old world, Democrats have created “refinements, technological advances, and a more sophisticated approach to the destruction of human freedom.”

And unfortunately, this is not a movie.

To gain dictatorial powers, liberal-leftist officials are creating the illusion that tens of millions of Americans are political lepers when they say exactly what common sense – and their own eyes – tell them is true.  Gargantuan lies and fear have become too useful for truth to matter.  As businesses, media, Big Tech, and government agencies become the enforcement limbs of Biden’s dictatorial policies, the “truth, the whole truth, and nothing but the truth” no longer flows easily across America.

Worse, the defamatory labels they create for dissenters are not just sticks and stones stuff; the insults come with real fangs for those who refuse to be complicit:  loss of livelihood, ostracism, suffering, jail, and death.

If you oppose Biden’s tyrannical COVID response, you’re labeled “Unpatriotic” and a “Science Denier.” Never mind that gobs of evidence scream that his response has been magnitudes worse than the virus.  Biden and his useful idiots – “Bidiots” – just call it misinformation and keep going.

If you prefer early treatment – which “the State” treats as if it doesn’t exist – over the vaccines, you’re labeled as “The Unvaxxed” and punished with job loss, bullying, public ridicule, denial of medical care, even death.  And for them, natural immunity, the gold standard of all vaccines, does not exist.

If you question the rigged 2020 election and advocate for reasonable protections against blatant voter fraud, you’re labeled a “Domestic Enemy,” a “Racist,” and a “White Supremacist” who wants to bring back the days of George Wallace and Jim Crow.  Even if you’re black.

If you believe that on Jan. 6 tens of thousands of Americans had every right to gather at the “Stop The Steal” rally for a day of patriotism, prayer, and peaceful protest, you’re lumped in with the “Insurrectionists” and “Domestic Terrorists” who were intent on “disrupting the transfer of power.”  It’s nuts.

If you believe that the Jan. 6 trespassers and rioters are exactly what they may turn out to be – fodder for an FBI false flag operation designed to criminalize political differences – you’re labeled as a “Conspiracy Theorist” who could be radicalized to become an “Insurrectionist White Supremacist.”

“Men have been barbarians much longer than they have been civilized,” wrote journalist Walter Lippmann in The Public Philosophy (1955).  “They are only precariously civilized, and within us there is the propensity, persistent as the force of gravity, to revert under stress and strain, under neglect or temptation, to our first natures.”

The long and persistent history of tyranny, barbarism and backwardness is what made America “exceptional.” But by neglect of the institutions of liberty, and by the temptation of a small group of people to control everything “for the greater good,” America has become unrecognizable.

Which means we have no choice but to do what Romney Wordsworth did when he was condemned to be “liquidated.”  He stuck to the truth, formulated a plan, and went on the offensive.

With the right to choose the method of his death, Wordsworth requested to pick his assassin who alone would know how he’d die, and he requested that his death be televised inside his home at midnight the following day.  It was granted.

When the Chancellor arrived as his assassin, Wordsworth described his method: A bomb would be timed to explode at midnight.  He then locked the door so the Chancellor couldn’t escape.  As the clock ticked down, the sweaty Chancellor panicked, begged Wordsworth to unlock the door and, at last, cried out to God.

He forgot about the cameras.

Wordsworth unlocked the door and the terrified Chancellor scurried back to the courtroom, where he was declared to be “obsolete.”  Sentence: Death.

“The chancellor, the late chancellor, was only partly correct,” said Serling with one final thought for viewers for all time.  “He was obsolete.  But so is the State, the entity he worshipped.  Any state, any entity, any ideology which fails to recognize the worth, the dignity, the rights of Man … that state is obsolete.  A case to be filed under ‘M’ for ‘Mankind’ – in The Twilight Zone.”

America is facing an inglorious death at the hands of petty domestic dictators.  Through neglect and temptation, they’ve dared to plant “the ripping imprint of a boot on the pages of history” by foolishly making an iron rule that “logic is an enemy and truth is a menace.”

For them, the clock is ticking.