Will Alexander
|
Posted: Apr 26, 2021 10:53 AM
Share   Tweet
The opinions expressed by columnists are their own and do not necessarily represent the views of Townhall.com. 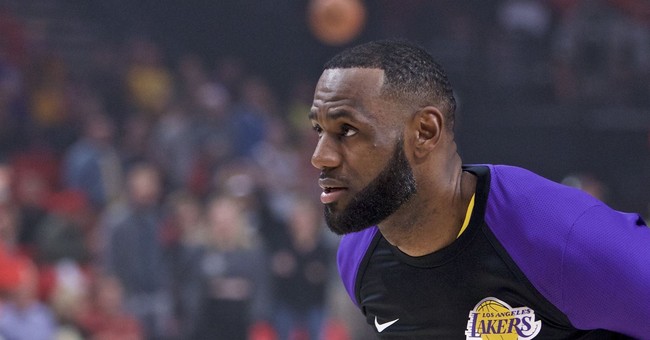 On my way to work last week, I drove by a young white woman driving a beat-up old 1980s car that looked like someone had jerry-rigged parts from a junkyard to make sure she had something to drive for a while before it broke down again.

Her two sons were in the back seat, the oldest about 9 or 10.  Wearing a red baseball cap over blond hair, he was assigned to watch his baby brother in a car seat facing the back window, whose tiny legs wiggled with energy. While holding on to the baby’s car seat with his right hand, he was engrossed in a book he was reading in his left hand.

The scene reminded me of my own single mother decades ago.  One of those Norman Rockwell snapshots in time.  Like this white woman, my mother could often be spotted driving alone down a crowded highway lost in an exhausted trance, struggling to come up with ways to patch together scraps she was given in life to make sure her kids grew up as normal as possible.

Then LeBron James flashed into my mind.

With a net worth of $500 million from his business ventures, his four-year $153 million Laker contract and his two-year $85 million contract extension, the 36-year-old is said to be on track to become a billionaire after signing a lifetime endorsement deal with Nike.

In September, LeBron closed on a $36.8 million Beverly Hills mansion, one of several sprawling estates he owns in California and Ohio. This 13,000-square-foot Beverly Hills home sits on 2.5 acres, with seven baths, two guest houses, a tennis court, a theater, and views that overlook Beverly Hills and the Pacific Ocean.  Jim Carrey and John Travolta are neighbors.

LeBron’s 30,000 square-foot Akron home sits on 7 acres, has 19 rooms and includes six bedrooms, eight bathrooms, a sports bar, a bowling alley, a barbershop, a home theater, a recording studio, and an aquarium.

LeBron lives in a world where most of Earth’s population – since the beginning of time – has never lived. Good for him. His hard work paid off. God bless America! Right?

Not quite. LeBron now wants prestige – he wants to be important. So he, like Oprah and the Obamas, has been investing his influence in the racial equality business.

Oprah, one of the planet’s richest women, believes the American system is a caste system, saying that “whiteness” gives even the poorest of the poor an advantage over blacks.

Obama, elected Earth’s most powerful man twice, said: “The legacy of slavery, Jim Crow, discrimination in almost every institution of our lives.  You know, that casts a long shadow and that’s still part of our DNA that’s passed on.  We’re not cured of it.”

The problem?  The racial equality business died in the ‘60s.  Today, rather than focusing on equality of opportunity, they’re looking to get equal outcomes while ignoring the main causes of unequal outcomes in troubled black communities: a culture of broken families and crime.

But to maintain the illusion that the racial business is still sustainable, new “investors” have to keep contributing, while old ones are prevented from demanding full payment for their investments.  It’s a racial Ponzi scheme.

Oprah and the Obamas still wield tremendous influence among those who believe that the racial equality business is valid, but in the grand scheme of things, they’ve become irrelevant, unimportant, and nakedly disingenuous.  They’re in Al Sharpton territory.

The telling sign was not the knee-jerk tweet he deleted about the cop who shot Ma’Khia Bryant, but the one that came afterward:

“I’m so damn tired of seeing Black people killed by police.  I took the tweet down because its being used to create more hate.  This isn’t about one officer.  It’s about the entire system and they always use our words to create more racism.  I am so desperate for more ACCOUNTABILITY.”

Folks, King James has no clothes. He’s buck naked and we see right through this stuff.

This tweet was unapologetic, disingenuous, and delusional.  It’s proof he’s gotten so invested in the race business that he can’t see what’s obvious even to people like Democrat congresswoman Val Demings and O.J. Simpson.

Yet, LeBron’s own life is proof that blacks can achieve greatly in America.  But given his history of drive-by protests, there’s no reason to believe that he’ll turn back from the road to oblivion outside basketball.

How can someone so successful act like such a victim?  Shelby Steele uncovered a clue years ago in “A Bound Man” (2008), a book about Obama, but with reasoning that applies to others.

LeBron’s wealth and success makes him vulnerable to being a sellout – of not being “authentically black.”  He needs to prove that he is.  It’s a primal craving for a sense of belonging.

But the post-'60s black identity is essentially a totalitarian identity, Steele wrote.  To be authentically black, “You must join a politics that keeps alive the idea of white obligation to blacks. Social determinism must be your worldview, so that you can see blacks as ‘systemically’ and ‘structurally’ aggrieved even when no actual oppression is apparent.”

People like LeBron, the Obamas and Oprah are “bound” because, to fit themselves into the world of a post-'60s black identity – which requires protest to be built into every black person’s sense of self, as Steele puts it – successful blacks must take their own experiences out of the equation.

To be authentically black, they must be inauthentic.  If their politics stayed true to the lives they’ve actually lived, they open themselves to becoming “Uncle Tom-types.”

“The problem is that today’s politicized black identity exacts too high a price for belonging,” Steele wrote.  “I cannot be fully myself without belonging, and I cannot belong unless I give up being fully myself.”

Eventually, this warped craving to belong makes you delusional.  You start to believe that the “whiteness” of a single mom in a beat-up old car struggling to raise her two boys, has advantages over blacks like LeBron. This is dumb.

Will LeBron snap out of it?  Probably not. But the next few days will tell us a lot; whether he will double-down on dumb or take a detour off the road to oblivion.