The Democrat Party Is Dead

Will Alexander
|
Posted: Apr 30, 2019 9:17 AM
Share   Tweet
The opinions expressed by columnists are their own and do not necessarily represent the views of Townhall.com. 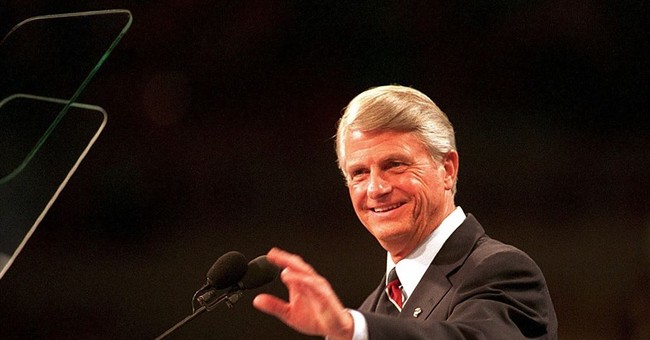 The Democrat Party is so unrecognizable today because it’s gone.  The name is still there.  Some of the old faces are there.  But the party of John Kennedy, Daniel Patrick Moynihan, Barbara Jordan and Zell Miller is dead.

Today’s Democrat Party is hollowed out by a chronic addiction to hyper-partisan controversies that mimic the feeling of being alive. Controversy gives Dems a constant drip of political dopamine they could never find in solving real problems. And they’re hooked now.

So, we’re witnessing a case of shared psychotic disorder that’s driving the party to self-medicate. Drug of choice? Donald Trump. Democrats are so impaired by their craving to “get Trump” that they imbibe day-in and day-out despite the deadly consequences to their party and to the country.

But while they trip out on Trump – seeing and hearing things that aren’t there – a mess of political misfits are filling the party void.  The new soul of the party is made up of a hodgepodge of misfits who team with rabid, left-leaning media and dark operators to push a pre-capitalist, post Judeo-Christian, anti-American revolution under a Democrat veneer.

At the slightest whiff of the old left-of-center odor, a Gestapo of tyrants is dispatched to keep fossilized Democrats like Biden and Feinstein whipped into submission.

But rather than killing the cancer in their party, the old Democrats let it go untreated.  Fearing retribution, traditional Dems’ mince their public words into such milquetoast, poll-tested blah-blah that they are unintelligible.  Would-be presidents are falling over each other to out-socialist the socialists without calling it socialism.  They want murderers and illegals to vote, free college, free medical, a guaranteed income, reparations, no guns, sanctuary cities, legalized prostitution, a federal law to legalize pot, and they want a duly elected president to be impeached.

Given Biden’s sad Anita Hill apology and his revisionist history on the origins of the “rule of thumb,” he lacks the political magic to raise the party from the dead. To placate the Gestapo, Biden even launched his campaign on an outright lie.  He said Trump dignified white supremacy after Charlottesville.  He didn’t.  But it doesn’t matter that he didn’t.  Charlottesville is political cocaine – a potent white powder that perpetuates the delusion of white power.

Trump’s election didn’t cause the party’s demise, it exposed it.  Democrat derangement has been a problem for years.

Sen. Zell Miller, (D-Ga.) was so alarmed at his party’s scorched-Earth partisanship in 2004 that he openly criticized Sen. John Kerry, spoke at the Republican National Convention that year, and endorsed George W. Bush.  Back then, Democrats had Bush Derangement Syndrome, a condition discovered and diagnosed by Dr. Charles Krauthammer.

“Where is the bipartisanship in this country when we need it most?” Miller asked an enthused Republican crowd.  “Now, while young Americans are dying in the sands of Iraq and the mountains of Afghanistan, our nation is being torn apart and made weaker because of the Democrat’s manic obsession to bring down our Commander in Chief.

“Motivated more by partisan politics than by national security, today’s Democratic leaders see America as an occupier, not a liberator.  And nothing makes this Marine madder than someone calling American troops occupiers rather than liberators.

“Never in the history of the world has any soldier sacrificed more for the freedom and liberty of total strangers than the American soldier …  It is the soldier who salutes the flag, serves beneath the flag, whose coffin is draped by the flag, who gives that protester the freedom to abuse and burn that flag.

“No one should dare to even think about being Commander in Chief of this country if he doesn’t believe with all his heart that our soldiers are liberators abroad and defenders of freedom at home.  But don't waste your breath telling that to the leaders of my party today. In their warped way of thinking, America is the problem not the solution.”

That warped thinking is even worse, today – especially on illegal immigration. Until Tom Friedman’s halting admission of America’s need for a strong border, no liberal of consequence has talked about what’s happening in plain sight with illegal immigration.

“As a commission we denounce hostility toward immigrants. … But we are a country of laws.  For our immigration policy to make sense it is necessary to make distinctions between those who obey the law and those who violate it.  Therefore, we disagree with those who would label any effort to control immigration as somehow anti-immigrant.  Unlawful immigration is not acceptable.”

These were true Democrats; people who had ideological differences but had the knowledge and experience to articulate why they respectfully disagreed on policy without resorting to constant ad hominem attacks, hateful innuendo and outright lies.   When they felt members of their party were dead wrong on big issues, they had the political courage to unapologetically follow what they saw was in the best interest of the country.

Today, that party is gone.

In its place is a party who has declared war against the opposition party and has hijacked the apparatus of the old Democrat Party to fundamentally change America.  It’s their way, or the highway. It is apologetically capitalist, apologetically American and religiously secular.

Raising the old party from the dead will take more than a candidate; it will take a miracle.