Wes Martin
|
Posted: Oct 19, 2017 10:00 AM
Share   Tweet
The opinions expressed by columnists are their own and do not necessarily represent the views of Townhall.com. 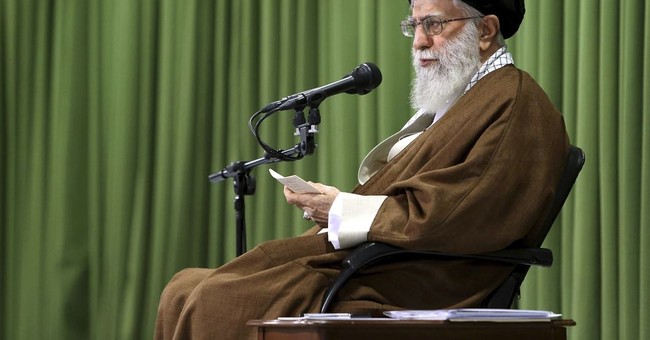 Articulating a new policy on Iran, President Trump made some refreshingly poignant statements about the ruling dictatorship. No previous American president has used such blunt terms to distinguish between the Iranian people and an illegitimate regime, or to describe the multi-faceted threat that the clerical regime poses to the region and the world. The timely recognition of the Iranian people’s search for democracy is a new pillar of his new strategy.

“The Iranian people long to, and they just are longing, to reclaim their country's proud history, its culture, its civilization, its cooperation with its neighbors," President Trump rightly stated in his speech on October 13th.

It seems increasingly evident that President Trump is willing to do more than just talk when it comes to Tehran's aggression.

Very early on in his presidency, he ordered the State Department to evaluate options for terrorist designation of the Islamic Revolutionary Guard Corps (IRGC), backbone of such aggression.  Now, in the wake of a comprehensive policy review, it has finally happened as the Treasury Department designated the IRGC as Specially Designated Global Terrorist (SDGT).

As the senior Antiterrorism Officer for all Coalition Forces in Iraq, I knew the IRGC was providing the Shiite militias deadly Improvised Explosive Devices (IEDs), Explosively Formed Penetrators (EFPs), and weapons that were killing U.S. and allied military personnel.

My informant inside Al Qaeda told me in detail of the IEDs, EFPs and equipment his Sunni organization was receiving from the IRGC, based upon the principle the “enemy of my enemy is my friend.”

The IRGC is a 120,000-member death squad. Its extraterritorial arm the Quds Force, under the command of Major General Qassem Sulaimani, has long been recognized as a terrorist organization. Both Presidents George W. Bush and Barack Obama knew about the IRGC/Quds Force connection, but never took the additional step President Trump has now achieved.

The IRGC and its Quds Force are determined to spread the extremist ideology of the mullahs abroad while killing or imprisoning the regime's domestic opponents. Those dissidents are, however, too numerous and too organized to be effectively suppressed. That is because the Iranian people have never accepted the mullahs' fundamentalist and misogynist ideology.

The fundamentalists in Tehran were almost overthrown during the vast national uprisings of 2009 (predating the Arab Spring). While former President Obama and former Secretary Clinton stayed silent, in favor of their nuclear deal with the regime, the IRGC led the murderous crackdown on the Iranian people.

It has been credited with numerous and far-reaching crackdowns in the years since the opening of nuclear negotiations with Western powers. These efforts have not only added to the perennial bloodshed among the Iranian people; they have also touched the US and its allies directly, in the form of several unexplained arrests and arbitrarily punitive prison sentences for dual nationals.

The IRGC’s foreign activities will not end until the international community takes action to drive them out of places where there is open sectarian combat or active terrorism by Islamic militants.

Terrorist designation and related sanctions for the IRGC are important initial steps toward this outcome, and if the Trump administration takes its own words seriously, it will not stop at that. The international community must realize that the regime must be overthrown. Overthrow is within reach and there is a viable and homegrown alternative.

As Maryam Rajavi, the president-elect of the primary Iranian opposition, the National Council of Resistance of Iran (NCRI), correctly pointed out, it is time to immediately place under sanction all the individuals, entities, institutions, and companies affiliated with the IRGC and their trade counterparts.

The IRGC and its mercenary militias must be expelled from Iraq, Syria, Yemen, Afghanistan, and Lebanon and, as a prerequisite to establishment of peace and tranquility in the region, be prevented from shipping arms and dispatching forces to these countries.

In the meantime, our European allies should not be captive to their trade interests with the Iranian regime and should acknowledge that the Iranian people have suffered tremendously at the hands of the IRGC.

The day will come when the Iranian people will rise up again to throw off the shackles of the clerical regime, already weakened and isolated by the community of nations.

With President Trump’s terrorist designation of the IRGC, and his strong stand against the fundamentalist regime, the people of Iran now understand Washington’s days of appeasing Tehran are over. The construction of the road to a free Tehran has achieved a major milestone.