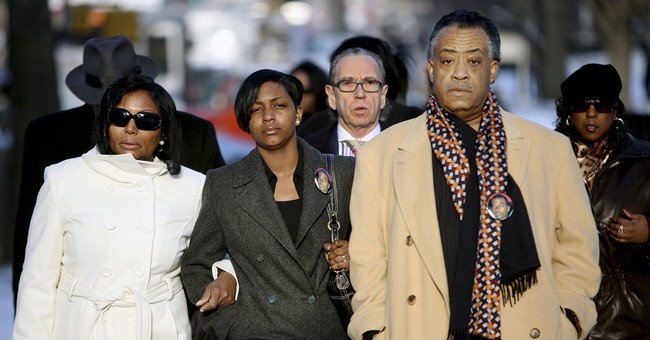 Let me see here. According to the history books, Civil Rights were won in the 60s with the signing of the Civil Rights Act pushed by Republicans and signed into law by Lyndon Baines Johnson. Al Sharpton now wants to secure his place in history as the Supreme Black Leader of our generation by going back to the past and creating a “New Civil Rights Movement?”

On December 13, 2014, Sharpton looks to lead yet another March on DC to correct police across the nation.

“We are not advocating violence, we are asking that police violence stop.” – Al Sharpton

I find this statement to be hollow. Not only does Sharpton have a history of destruction and violence in the wake of his prior public outcries, such as Freddie’s Fashion Mart, Tawanna Brawley and the Duke Lacrosse fiasco, His recent whipping of the media circus no doubt contributed to the violence and destruction in Ferguson. From another point of view, does Sharpton have a job? As a cleric, isn’t he supposed to help empower people and help them to learn love and forgiveness? Where is his flock? What congregation has he ever tended in the name of the Lord? He performs on the world stage using the title of Reverend to stir up controversy and hatred. He fancies himself one to be revered, and actually does little if anything to demonstrate the behavior of one who ought to be.

Sharpton was a great quasi-vaudevillian act when he would periodically appear on the "Morton Downey Jr. Show" decades ago. It was quite amusing watching the pseudo-civil rights leader engage in polemics on race with coiffed curly locks, a satin jumpsuit and a massive medallion hanging down from his neck. I always thought it was just theatrics on par with professional wrestling without the steroids and tights. Slicking back the hair, dropping a massive amount of weight, and wearing Armani suits cannot change that fact. It is still the same message of hate, oppression and systematic denial of basic rights that he peddles to the same constituency of poor black Americans who fill his coffers and rally around him.

Yet this man, often invited to the inner sanctum of the White House as of late, seems immune to the same level of accountability and responsibility that he would call out from others. A blatant tax evader who currently owes over $4M in back taxes puts himself out there to be admired and followed? Doesn’t it speak to a level of arrogance to believe that he is immune from what the rest of working Americans are required to do? And for those of you, who like to scream about the 1% not paying their share, look at who you just picked to lead you. He is so far removed from the struggle of the inner city black communities, I really can’t fathom why anyone thinks he functions a spokesperson. At best he is referencing his own experience as a young black man decades ago and how the world has changed.

Eventually, the curtain will fall and Sharpton will have to exit stage left. Whatever needs to be done to heal the racial divide requires the actions of mature adults and not those who would liken 2014 to the struggles of the 1960’s. We do not need marches and tired renditions of “We Shall Overcome” or slogans like “Hands Up Don’t Shoot”. The Black community needs real and difficult conversation about the culture that has evolved since the 1960’s in our inner city communities. We need to question how we let what was supposed to be a “hand up” becomes a way of life for many Black Americans in the inner city.

Instead of taking a hard look inside our communities, Al Sharpton has decided to take to the stage again and march on Washington. This time the rallying cry is police brutality and targeting of blacks by law enforcement. I would beg those of you inclined to follow his lead, please, look at the statistics from the FBI and other organizations. Look up real data and see that this is not the problem on a national scope that Mr. Sharpton and the Liberal media would have you believe. The problems in our communities will not be solved with marches and rallying cries. They will be solved with hard work, difficult conversation and changing the culture of our inner city communities. We need economic and community plans to help minorities of all races see the light at end of the tunnel and feel they can take control of their own destiny. This poverty pimp’s time is over.

Trump: I’m obligated to appoint a new SCOTUS justice — without delay
Hotair
Will Lindsey Graham Eat His Own Words About No SCOTUS Nominee in Final Year of Trump Term?
Redstate