Wayne Allyn Root
|
Posted: Nov 28, 2017 12:01 AM
Share   Tweet
The opinions expressed by columnists are their own and do not necessarily represent the views of Townhall.com. 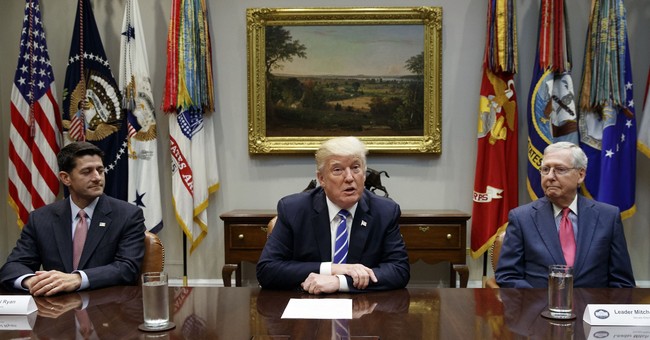 The current GOP tax plan sitting in front of Congress has problems. If a true-blue lifelong conservative tax cut evangelist like me is not sold 110 percent, something is very wrong.

My goals are simple- more power and money to the people that earned it (taxpayers and business owners) and less money for the greedy, wasteful government.

That’s why it pains me to say the current GOP tax plan is not what politicians and tax experts claim it is.

The problem is Congress ruins everything it touches. Just like the repeal of Obamacare. They could have simply voted to kill Obamacare. Instead, they made the repeal a trillion-dollar mess no one understood. So, it failed. Well don’t look now, but the stupid GOP Congress has done it again.

Why didn’t the GOP keep it simple? The goal of cutting taxes is two-fold.

A)  Make the economy explode upward by allowing people to keep more of their own money.

B)  Win elections, because voters are so thankful for the extra money and the prosperous economy.

All the GOP had to do was cut taxes across the board by 10 percent this year, 10 percent next year (2018), 10 percent in the third year (2019). Give the tax cut to everyone. Keep it simple. Make everyone jump for joy. Do that, and Americans would be walking into voting booths with more money in their hands for the next two elections. The GOP would win in landslides in both 2018 and 2020.

The most important rule of business is: “KISS- Keep It Simple Stupid.” Instead, the stupid GOP Congress made this tax plan so complicated; even I have no idea what’s in it, or what the effect will be on my taxes.

First, GOP politicians are trying to convince us this is a huge tax cut. Reagan cut taxes dramatically from 70 percent to 28 percent. He didn’t cut them from 39 percent to a lousy 35 percent.

Secondly, this tax plan barely cuts tax rates for individuals, but in return, it cuts a ton of deductions. Important deductions. Mortgage interest. State income taxes. Property taxes. Medical expenses. Student loan interest. And how about this doozy- it dramatically changes the way alimony is counted towards taxes.

So, is this really a “tax cut?” If I save $5000 a year in taxes based on lower rates, but pay $10,000 a year more based on reduced deductions, how is that a “tax cut?” Sounds like a tax raise to me. And when people figure this out a year from now, they aren’t going to vote Republican.

Here are the big problems.

*If a 35 percent corporate tax rate is far too high for big business, so high that companies are moving out of America, why is a 35 percent tax rate just fine and dandy for individuals?

*If you lower our taxes a little, but take away most of our deductions, how is that a “tax cut” at all? Sounds to me like this is “revenue neutral," which means you’re not actually cutting our taxes.

*If you’re giving a 20 percent tax rate to big business to encourage economic growth, spending and job creation, why not for small business, or individuals?

*Why are you making the gigantic tax cut for corporations permanent, while the tiny tax cut for individuals is temporary? Does anyone notice this?

*If eliminating the deduction for state and local taxes is such a fantastic idea for individuals, why are you leaving that exact deduction in for corporations?

*If a homeowner has a $20,000 property tax bill, but can’t deduct it anymore, you’re asking them to pay taxes on money they don’t have. How is that helping the economy?

*Why is the cut for individuals so small? Why are you only cutting the top rate from 39 percent to 35 percent (and making that tiny cut temporary)? Is this because you’re giving away 75 percent of the money to a gigantic permanent cut to big business, and leaving crumbs for the rest of us?

*Why are you making this so darn complicated? Why don’t you just cut everyone’s taxes across the board?

*I’ve saved the most important for last. The claim is there’s a fantastic new special 25 percent tax rate for small businessmen like me. Great! This is what President Trump wanted from day one. This is the main reason I’d support this new tax plan. Except I’ve come to find out the new lower tax rate only applies to 30 percent of a small businessman’s income. The other 70 percent gets taxed at the highest personal rate. Really?

If changes are made to lower tax rates for individuals; to apply the special tax rate for small business to 100 percent of their income; to restore crucial tax deductions like the mortgage interest deduction, property tax deduction and medical expenses deduction; I could be persuaded to give my full support to this GOP tax plan.

But if someone like me, who has never before in his life questioned a tax cut plan, has significant issues and concerns, it’s a safe bet that I speak for millions of conservatives. This bill has huge problems.

Because until you do that, this tax cut evangelist warns this GOP tax plan doesn’t really cut taxes. At least not for the people that matter- GOP voters.