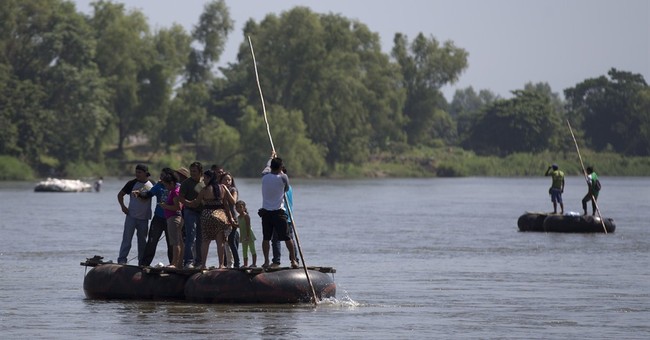 The illegal immigrant situation at our southern border is more than just a national crisis. It’s part of the greatest conspiracy in world history—a purposeful attempt to create catastrophe, overwhelm the system, and force the American people to make a dreadfully wrong decision under duress.

Obama wants our good-hearted Christian nation to see women, children, and families begging for help, begging to live the “American Dream.” He wants immigrants to be in the worst possible shape after a long journey from Central America—starving, injured, diseased—in such terrible shape our hearts break and we agree to take them all in.

He is purposely creating a crisis, hoping to force us to overreact by agreeing not only to help these new arrivals, but by giving amnesty for twelve million other illegals already here.

He wants us to approve government expansion and billions in new spending. Will he use that money to “solve” the crisis? No! He’ll use it to pry open the borders even wider, allow millions more into America, pay for lawyers for each of them (to prevent deportation), and hand them billions in welfare,food stamps, aid to dependent children, education, and free meals at school— all paid for by the middle class

It's a 2-for-1. This is how you create a permanent, loyal Democrat voter bloc, at the same time you bankrupt the middle class.

As I explain in my book The Murder of the Middle Class, this is a purposeful plan right out of the old Ivy League radicals’ playbook. How do I know? I was Obama’s college classmate at Columbia University, Class of ’83. We learned this plan at Columbia. My classmates vowed to put it into effect someday to overwhelm the system, collapse capitalism, crash the U.S. economy, and force America to its knees. From that position of crisis, weakness, and panic, they’d “fundamentally change the country.” Recognize those words?

So how do we fight back? Obama and his socialist cabal are liars, frauds and hypocrites. Yes, they want to help the poor and downtrodden - but only with your money.

Yes, they want to house the world’s homeless— but only in your home.

Yes, they want to let in the world’s poverty—stricken immigrants- but only into your backyard.

None of this “dirty work” ever touches their mansions, yachts, private jets, private schools, or— God forbid— their precious children.

Last I checked, Sasha and Malia won’t go to school with shoeless illegal immigrants with lice, scabies, and tuberculosis. Last I checked, illegals with head-to-toe gang tattoos won’t be mugging old ladies or dealing crack in front of the Georgetown townhouses of lobbyists, lawyers and politicians like Hillary Clinton.

Or… Maybe they will. Bringing this flood of illegal children (have you noticed how with liberals it’s always “we’re doing it for the children”?) into nice middle-class communities to destroy their neighborhoods, schools, and budgets is all part of Obama’s plan to overwhelm the system and “murder the middle class.”

It’s time we counter these liberal, elite hypocrites. First, we must stand and fight to the last breath. The answer is so simple: SEND THEM BACK. Then take action to secure our border.

The last thing any Republican should do now is support any form of amnesty. Are we that stupid? That message would result in millions more coming.

But in the meantime, let’s demand these hordes of illegal immigrants, motherless children, and tattooed gangbangers be housed in Washington, D.C. Not just anywhere in D.C., but in Georgetown, where all the liberal, elitist hypocrite politicians live. They want them in this country, let them walk by them as they walk to their limos.

Give them jobs at the Ralph Lauren store on Rodeo Drive. Or the Armani store on Madison Avenue. Or at Saks Fifth Avenue. Why doesn’t Rachel Maddow hire one of them as the booker for her MSNBC show? Since Obama is so quick to sue American companies for daring to demand English be spoken at the office, Michelle can hire a few to work in key positions in the First Lady’s office! Perhaps they can speak Spanish only while directing National Security.

Perhaps Hillary can get one of them a $600,000 sinecure at NBC like the one she got Chelsea.

Why are we sending this needy horde of illegal immigrants to struggling middle-class neighborhoods? Let’s bus them to the wealthy liberal towns. They’ve got the money and resources to care for them. You like ’em so much, you take care of them.

While we’re at it, let’s demand they go to school at elite private schools, starting with Sidwell Friends School, where Sasha and Malia attend class. Let’s see how Michelle reacts when her precious daughters come home with lice, or cough with TB, or party with tattooed gangbangers from El Salvador.

There’s the ticket. It’s time for middle class America to stand up and fight back. It’s time to turn the tables. Let the wealthy liberals who support Obama and weep for illegal immigrants practice what they preach. It’s time to send the illegal crisis to the doors of Beverly Hills and Georgetown.

That’s how you stop “the murder of the middle class” and take back our country.