Vijay Jayaraj
|
Posted: Aug 07, 2018 12:42 PM
Share   Tweet
The opinions expressed by columnists are their own and do not necessarily represent the views of Townhall.com. 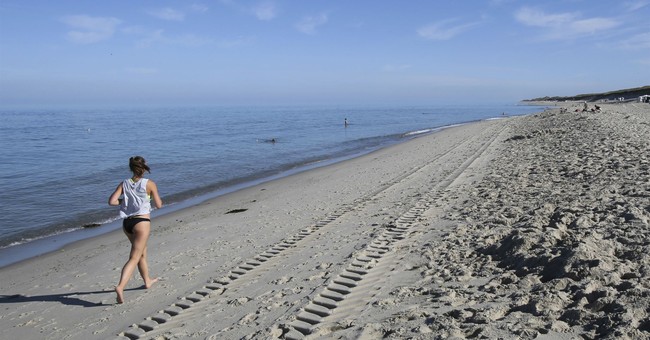 NBC reported that this sea-level rise will wipe out major metropolitan coastal cities around the world, causing mass migration of displaced people.

Are these claims true?

Sea level rise was not a major issue during the past 2000 years. The media’s current attention has been due mainly to claims that climate change is accelerating sea-level rise and causing permanent damage to life in small islands and coastal regions.

The popular claim goes like this: Carbon dioxide emission from human sources has caused an unnatural and rapid increase in global temperatures. This in turn has accelerated ice melt in the poles, which in turn contributes to rising sea levels, which threaten human life.

Before we address the role of humans in sea-level increase, it is important to examine, from a geological and historical perspective, what exactly is happening to sea levels.

They began rising at the onset of the Holocene period 12,000 years ago. The Holocene is a warm period within a longer, cooler Interglacial period. It was preceded by a colder period and will likely be followed by another.

The rise in sea levels at the onset of Holocene is understandable. Ice had covered large parts of the Northern Hemisphere before the Holocene. When it melted, water poured off the continents into the oceans, and the “maximum sustained rate of global sea-level rise [from about 20,000–10,000 years ago] was about 10 mm/year or 1 m/century.” During that period, local sea-level rise could have been as much as 40 millimeters per year.

Once the continental glaciers had disappeared, however, the rate of sea-level rise fell with each passing millennium.

Yes, sea levels are still rising. The questions to be answered now are (1) whether there has been an unnatural increase in sea levels during recent decades and (2) if the rise in sea level is a threat to life.

More recent papers indicate that sea-level rise was only around 1.3–1.5 millimeters per year during the period 1958–2014, suggesting that the rate of sea-level rise failed to increase despite a huge increase in atmospheric carbon dioxide levels.

Decadal sea level data from tide gauges around the world show no significant accelerated rise during the 20th century. This is despite the fact that tide gauges have the inherent bias of showing an artificially rapid increase in sea level.

All these data indicate that there is no dangerous, or even significant, increase in the rate of sea-level rise during recent decades. The human contribution to sea-level rise is insignificant.

The absence of accelerated sea-level rise is due in part to the stability of Arctic and Antarctic ice sheets. Studies show that neither Polar region held more ice in the Holocene period than they hold today, except during the Little Ice Age of the 16th and 17th centuries.

Moreover, seasonal variations and changes in the Polar regions do not have any significant long-term impact on sea levels. Even the collapse of ice shelves within the Antarctic ice sheets will result in only a few millimeters’ rise in sea level.

But what about the news regarding small islands’ shrinking and even being submerged because of sea-level rise in recent decades?

The popular claim that islands are being wiped out by climate change-driven sea-level rise should have been put to rest when it was found out that the Islands were not disappearing but increasing in size. Studies showed that the Pacific islands like Tuvalu grew (73 hectares in 40 years) instead of shrinking. How can this be, with global sea level rising? Simple. The islands are composed largely of corals, and corals grow—in many cases faster than sea level rises.

During the Medieval Warm Period (the 10th and 11th centuries), global sea level was 170 centimeters higher than today’s, yet life flourished across the globe.

In the worst case scenario of sea-level rise accelerating to 3 millimeters per year due to global warming, it will take more than 500 years for global sea level to return to that height, it will pose no threat to life!

The climate empire runs its business by selling lies and manipulative data to the public. Dangerous, manmade sea-level rise is just one of its many tricks. Neither the public nor policymakers should be frightened into embracing climate and energy policies whose costs far exceed their benefits.