Reid Has Become a McCarthy for our Time 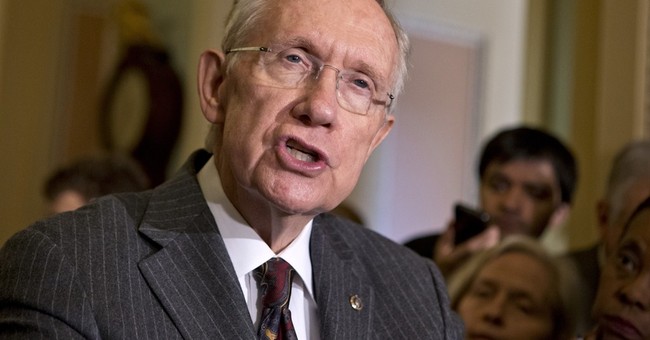 We should ask Senate Majority Harry Reid (D-Nev.) the same question once posed to Sen. Joseph McCarthy by U.S. Army head counsel Robert N. Welch: "Have you no sense of decency, sir? At long last, have you left no sense of decency?"

Reid is back in the news for denigrating the peaceful supporters of Nevada rancher Cliven Bundy, a popular critic of the Bureau of Land Management policy, as "domestic terrorists."

McCarthy in the 1950s became infamous for smearing his opponents with lurid allegations that he could not prove, while questioning their patriotism. Reid has brought back to the Senate that exact same McCarthy style of six decades ago -- and trumped it.

During the 2012 presidential campaign, Reid libeled candidate Mitt Romney with the unsubstantiated and later-refuted charge that Romney was a tax cheat. "The word's out that he [Romney] hasn't paid any taxes for 10 years," Reid said.

Later, when asked for proof, Reid offered a pathetic rejoinder: "I have had a number of people tell me that." One wonders how many names were on Reid's McCarthyite "tell" list -- were there, as McCarthy used to bluster, 205 names, or perhaps just 57?

When asked again to document the slur, Reid echoed McCarthy perfectly: "The burden should be on him. He's the one I've alleged has not paid any taxes."

When the Koch brothers donated money that was used for political ads -- just as liberal political donors George Soros and the Steyer brothers have done -- Reid rushed to the Senate floor to question their patriotism: "These two brothers ... are about as un-American as anyone that I can imagine." The charge of being "un-American" is also vintage McCarthyite slander.

Reid also has a bad habit of racial bigotry. He once praised fellow Sen. Barack Obama because he was, in Reid's words, a "light-skinned" African-American "with no Negro dialect, unless he wanted to have one."

When Reid was worried that he would not get enough Hispanic voters to the polls, he condescendingly lectured the Latino community: "I don't know how anyone of Hispanic heritage could be a Republican, OK. Do I need to say more?"

Reid once singled out for damnation just one Supreme Court justice -- Clarence Thomas: "I think that he has been an embarrassment to the Supreme Court."

Reid has also brought back McCarthy's custom of vicious and sometimes profane insults.

When Gen. David Petraeus brought proof to Congress that the surge in Iraq was beginning to work by late 2007, Reid declared, "No, I don't believe him, because it's not happening."

He elaborated on that charge by labeling Petraeus -- at the time the senior ground commander of U.S. forces fighting in Iraq -- a veritable liar. Reid alleged that Petraeus "has made a number of statements over the years that have not proven to be factual."

When an African-American and Democratic appointee to the Nuclear Regulatory Commission, William Magwood, opposed Reid on the Yucca Mountain nuclear waste disposal site controversy, Reid called him a "first-class rat," "treacherous, miserable liar," "sh-t stirrer," and "one of the most unethical, prevaricating, incompetent people I've ever dealt with."

Like a pre-reform-era politician, Reid entered public service relatively poor and will leave it as a multimillionaire. He has granted lucrative favors to casinos and rich investors who hired his sons' legal firm. While in office he made considerable profits on private business and real estate deals. Some of those who donated to his campaigns got favorable government treatment.

Reid recently paid his granddaughter thousands of dollars from his campaign war chest to make jewelry gifts for his donors and friends. Only after a storm of criticism did he reimburse his campaign fund.

So how does Reid's reckless career continue with the Senate leader avoiding the sort of congressional censure that finally did in McCarthy? Why is there is no progressive muckraker to take on Reid the way that Edward R. Murrow once exposed McCarthy?

For the left, Reid's utility as an attack dog (like McCarthy's utility to Republicans) outweighs the downside of his crude bombast.

His lurid, unsubstantiated charges against Romney were helpful in demonizing Romney as a rich grandee. His untruths about Petraeus helped shore up Democrats' antiwar credentials during the 2008 campaign. Environmentalists did not object to his character assassination of nuclear power advocate Magwood.

Reid's viciousness also serves as a deterrent. Why tangle with the anything-goes Reid when it means endlessly replying to a litany of smears?