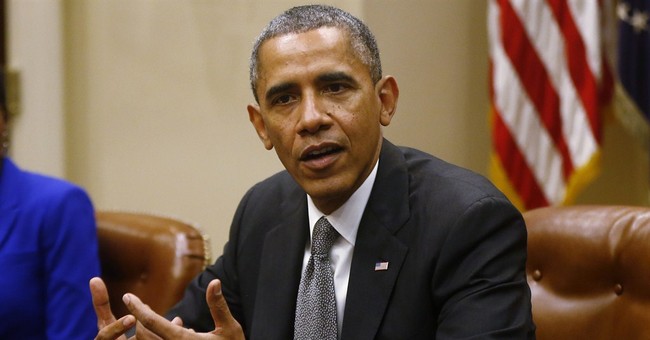 Republicans and Democrats are still name-calling in their arguments over the government shutdown, out-of-control federal spending and the implementation of Obamacare.

Yet if both sides would agree to just follow the earlier advice of President Obama, tempers might cool and a deal could still be reached. And had President Obama himself just listened to earlier guidance from Barack Obama, his opponents might have had no cause for either a government shutdown or another debt-ceiling crisis.

In 2006, Obama rightly called for an end to the Bush administration's intemperate deficit spending that had resulted in an annual deficit of $250 billion that year. Accordingly, Sen. Obama voted to shut down the government rather than automatically to extend the debt ceiling. He explained his resistance this way: "Washington is shifting the burden of bad choices today onto the backs of our children and grandchildren. America has a debt problem and a failure of leadership. Americans deserve better."

Obama rightly added an additional warning in forcing an impasse over further borrowing: "Every dollar we pay in interest is a dollar that is not going to investment in America's priorities. Instead, interest payments are a significant tax on all Americans -- a debt tax that Washington doesn't want to talk about."

The next year, Obama voted "present" rather than to approve another $160 billion in annual borrowing that would add to the debt. Then-Sen. Joe Biden, Sen. Harry Reid and Rep. Nancy Pelosi agreed with Obama's worries over serial deficits, at various times voting no to President Bush's requests to raise the debt ceiling to allow more annual deficits.

Unfortunately, the calls of Obama, Biden and Reid for fiscal restraint were largely ignored by now suddenly deficit-obsessed Republicans -- and the 2006 shutdown effort failed 52-48 on a close but strictly partisan Senate vote. While President Obama has repudiated his earlier "political vote" against raising the debt ceiling, then-Sen. Obama was mostly right in trying to shock the Bush administration into curtailing unwise expenditures.

In 2008, candidate Obama returned to the issue of profligate spending again. He went so far as to call the continued Bush deficits "irresponsible" and "unpatriotic," even though the deficits at the time had been far smaller than they are at present, and the national debt was trillions less than it is now.

Nonetheless, Obama was right again. Even in the period before the present five consecutive $1 trillion deficits, the U.S. government was already courting danger.

Yet this year, the Obama administration's smallest deficit in six years will still exceed $600 billion -- even with the sharp sequestration cuts, even with the supposedly recovering economy, even with the curtailment of two wars abroad, and even with taxes on the top income brackets returning to the Clinton-era rates.

Candidate Obama once had a vision of a new national health coverage that would lower premiums. His dream coverage was not supposed to affect existing health plans. It was promised to make American businesses more competitive. New universal insurance would even decrease deficits.

Well aside from its botched online inauguration, Obamacare is already raising existing premiums and requiring new taxes. It is forecasted to spike the debt. The rules of existing health plans are changing. Businesses are discouraged from hiring permanent employees. Obama in 2008 might have agreed with all the present criticisms of his own, or any rival, universal health-care plan.

For most of 2008, candidate Obama also called for a kinder and gentler Washington politics. In early 2011, Obama admirably reminded Americans to conduct themselves more civilly during political debate and disagreement: "Only a more civil and honest public discourse can help us face up to our challenges as a nation."

Unfortunately, during the present shutdown, the president in a single press conference called his Republican adversaries names of the sort that he earlier had warned the nation about. Through a series of metaphors, similes and allusions, Obama reduced his opposition to little more than ransom takers, house burners, defaulters, global economy crashers, nuclear bomb users, extremists, threateners, extortionists, hostage takers, plant burners and equipment breakers -- who are apparently also untrustworthy and irresponsible.

Just as the obstructionist Obama was not an arsonist in 2006 and Joe Biden was not a hostage taker, Republicans who now likewise wish to follow their examples to control the spending of a government even deeper in debt, and additionally beset with a costly but unproven new entitlement, are not either.