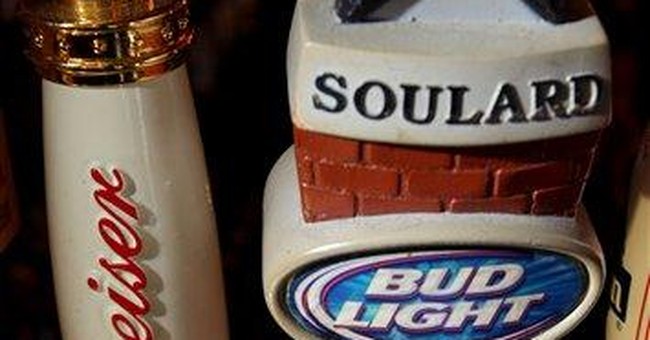 In the last 20 years, we were lectured constantly about “post-industrial” America.

Experts proclaimed that the United States had evolved into an “information society” of “high-tech jobs.” The traditional sources of American strength -- manufacturing, the production of food and fuel, and the assembling of cars and trucks -- were apparently passé. Instead, others less fortunate abroad were to do those more grubby tasks, while Americans, with their BlackBerrys and laptops, funded, organized, lectured and critiqued them.

Illegal aliens might cook our meals or change our children’s diapers to free us up for far more important tasks of litigation, finance and environmental review. The Chinese would make everything from our shoes to our phones. The Japanese would supply us with quality high-end goods like cars and cameras. The Africans, Arabs, Iranians, Russians and Venezuelans would drill oil in nasty, dirty places so we wouldn’t have to.

Even our food -- which would be always in season -- would increasingly be shipped in from Mexico and South America.

Refined Americans became more concerned over questions of gender, race and class justice in our universities and courtrooms, as if the chief problem were only dividing the American pie equitably, rather than expanding it.

The real source of American wealth apparently was the mere fact that we were Americans. Therefore, the rest of the world should naturally loan us money to sustain our envied lifestyle. Our homes got bigger, and we bought and sold them more as investments than as places to raise our families.

Our top graduates opted for Wall Street, insurance, law, journalism and academia. Why not, when laws made it more conducive to invest and trade, but harder and less lucrative to build, drill, farm and manufacture?

American universities bragged that they were teaching the world how to design and engineer -- as our own kids gravitated to law and management schools. We relied on a paternalistic government to regulate what we shouldn’t do rather than turn to our best and brightest private citizens to show us what we could.

Alas, no successful civilization in history -- Greece, Rome, England, France, the list goes on -- ever found prosperity through its bureaucrats and lawyers.

The result of all this growing American laxity and condescension so far is mixed.

The good news, aside from the fact that Americans have never had it so good, is that millions in China are no longer starving. Japan talks of marketing hybrid cars, not re-establishing its old “Co-Prosperity Sphere.” The Persian Gulf looks more like Las Vegas than the badlands of Waziristan. Billions in the new globalized world are now emulating the American middle class, which, for all the caricatures, still represents freedom and affluence for so many.

The downside, of course, is a growing collective panic here at home, over whether such undeniable progress is sustainable when America is up to its neck in debt, dependent on foreign energy and plagued by self-doubt and inaction.

Our 21st-century paralysis is surprising. The United States is not materially exhausted. We sit atop trillions of dollars worth of untapped oil, gas, coal, shale and tar sands.

America could mine more uranium, and reprocess fuels to build hundreds of nuclear plants. American agriculture is blessed with the world’s best soils, most developed irrigation systems, and most productive and astute farmers.

There is as much sun and wind in the western United States as anywhere in the world. We have plenty of natural resources and the know-how to make all the wood, steel and cement products we need.

A new, hungrier generation of Americans will have to want to reclaim our pre-eminence and change the national attitude. It must be ready to pay off generations of debt rather than borrow, build rather than sue, and drill rather than whine.

It’s time to honor rather than avoid and outsource physical labor. Our children are healthy enough to cut our own lawns and pick our fruit. Let’s also hope they want to hear a lot more about Gen. David Petraeus’ success, and a lot less of Madonna’s latest psychodramas.

But just as importantly, what Americans need now is leadership to get moving again -- rather than more platitudes about hope, squabbling about race and gender, and endless rhetoric about who is really a maverick or a true conservative or the most liberal. What we need to know from our two presidential candidates are specifics about how to jumpstart America.

So, how many more barrels of oil, refineries and megawatts will America produce --and when and how? How much debt will the next administration retire -- and when and how. How and when will our schools return to knowledge-based rather than the present (and failing) therapeutic curriculum?

Americans, in short, should be tired of hearing that we are a post-industrial, postmodern, post-anything society. Instead, we want to be known again as a can-do producer nation that sweats as much as it thinks. And the confident presidential candidate who can best assure us of that will surely win this election.