Trent Franks
|
Posted: Mar 22, 2017 12:01 AM
Share   Tweet
The opinions expressed by columnists are their own and do not necessarily represent the views of Townhall.com. 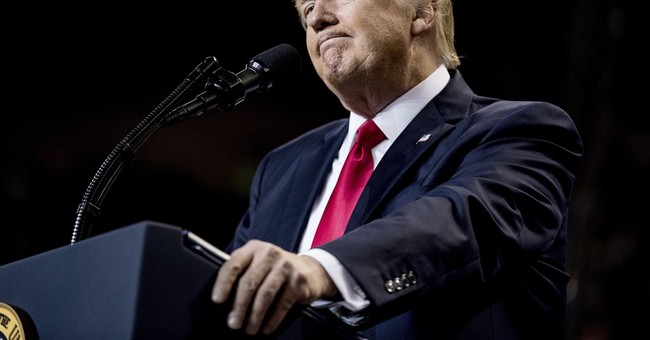 As habitually practiced since only the mid-1990s, by doing absolutely nothing, with almost no accountability accruing to them (using the “no-debate stealth filibuster”), the minority in the U.S. Senate can easily and nearly always either stop every legislative effort from even coming to the floor, or far more insidiously, sabotage it by requiring a “dirt and ice cream” result.

Unlike the 60-vote rule for debate cloture to get to a final vote (which gives the minority the power to extend and even perpetuate debate), this more recent application of the 60-vote rule gave the minority the power of continuous filibuster to prevent any consequential bill from being brought to the floor at all. Interesting. Two applications of the 60-vote rule; one to extend debate indefinitely, and one to prevent it completely. To logically defend one of these applications is to fundamentally eviscerate the other. Those who would ignore this glaring paradox and still herald the sacred principle of 60 votes in the Senate then have the attending sacred responsibility to do away with the “sacrilegious” reconciliation procedure, since, once in a budget year, it circumvents the revered 60-vote requirement. Thus, these two core principles are antithetically juxtaposed.

The most pernicious and dangerous element of the no-debate stealth filibuster is that clarity and principle never have a chance to be seen; and the people never know who to blame or support. Unfortunately, nearly every major piece of legislation supported by the Trump administration is on course to face this same fate. This has especially profound implications for the Congressional appropriations process and the Article One Constitutional Power of the Purse. Long-term, this means political nirvana for Democrats, anathema for Republicans, and continued chaos and lack of clarity for America. It will be interesting to see what Donald Trump’s tweets look like when he fully understands this reality as he most certainly will.

To rescue us all in this complex debate come the excerpted solutions of no less than an experienced Senate Majority and Senate Minority Leader: “The country can’t be run this way, where nothing gets done.” … “Unless after this election there is a dramatic change to go back to the way it used to be” (before the “no-debate stealth filibuster”) “the Senate will have to evolve as it has in the past” … “But it will evolve with a majority vote determining stuff. It is going to happen” (emphasis mine), meaning that the majority, not 60 votes, would rule.

These are not the words of Leader Mitch McConnell, but those of Harry Reid when he assumed Hillary Clinton would be president and Sen. Schumer would be Majority Leader. Sen. Schumer refused to comment and will likely continue to refuse. However, after such unequivocal statements to the contrary, to predicate America’s future on the hope that Democrats will suddenly be seized with an epiphany of fair play toward Republicans and not follow through with Mr. Reid’s plan, when given the chance, is to risk the survival of this Republic on a hope that has never manifest in the past.

Rather than to deal with 60-vote no debate rule forthrightly in the Senate, House Republicans are now forced to try to repeal and replace Obamacare through reconciliation. We will do our best. However, reconciliation means the legislation will have to fit through the “Byrd Rule”. Unless it is reinterpreted by someone (like Mike Pence) presiding over the Senate, the present construal of the Byrd Rule will not allow for full repeal or full replacement. This means that the legislation that emerges will not be a true consensus plan among or between Democrats and Republicans. Senate rules once again have obscured and subordinated best policy considerations, and Republicans’ quest to produce a policy facilitating an innovative, market-based American system that empowers patients, respects healthcare providers, and provides the greatest number of people the best healthcare in the world, in the most cost effective way, will fall short of its goal. Americans will not have clarity. Political culprits will escape accountability and the result will be legislation that neither fully repeals nor replaces Obamacare. Republicans will now own it just as it is imploding, and conscientious souls will risk brain damage trying to understand what and how it all happened.

Elite intellectuals and sentinels of Senate tradition will tell President Trump and all of us mere mortals that we just do not understand the sage intricacies and distinguished traditions of the complex and ever evolving Senate rules. They now have a clarion responsibility to also tell us their plan, under those rules in this political age of polarization, in these rare but fleeting days of unified Republican government, to enact the policies necessary to save America before Harry Reid’s dreams and Mitch McConnell’s nightmares come true. Few things could damn the institution or this Republic more.

It is possible that changing the 60-vote rule or its practice in the Senate may one day prove disastrous, but we fail the test of our time if we allow that fear to blind us to the disasters that are certainly upon us in this moment. We are $20 trillion in debt. We are close to socialized medicine. The federal bureaucracy is growing out of control. The very foundations of the nation continue to be stained by the blood of over a million of its own preborn children every year. The Constitution hangs by a thread. The leading sponsor of terrorism in the world is on track to legally gain nuclear weapons. Our military and the nation’s place in the world in general have been devastated by the Obama years. The 60-vote rule did not empower Republicans to stop these things in the past when we were in the minority or the majority, but it does empower Democrats to prevent us from effectively addressing these dangerous realities in the present, anytime soon, or maybe…ever.

So, to those apprehensive Republicans who have come to the moment of quiet capitulation to a Senate rule that now prevents critical legislation from even being brought to the floor for debate and amendment before the American people under regular order, let me take a load off your mind and encourage you just to relax. If Americans watch Donald Trump and a unified Republican government willingly allow ourselves to be gridlocked again, given all the implications, and after all of our promises, Democrats will very likely regain control of American government sooner than we would ever hope, and when they do, as Mr. Reid has so eloquently explained, this little filibuster problem will be resolved. Unfortunately, we then may have thrown away the greatest opportunity in modern history to do those things necessary to save this country for this and coming generations.

Congressman Trent Franks represents the 8th District of Arizona and is Past Chairman of the House Subcommittee on the Constitution.