Trent England
|
Posted: May 19, 2022 12:01 AM
Share   Tweet
The opinions expressed by columnists are their own and do not necessarily represent the views of Townhall.com. 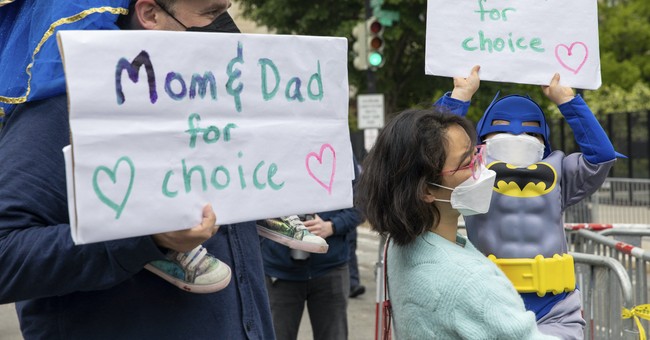 Amidst the general wailing and gnashing of teeth over a Supreme Court ruling expected to overturn Roe v. Wade, one attack stands out as especially hypocritical. That is the contention that the Court is illegitimate because the presidential election process is insufficiently democratic.

A columnist for the Los Angeles Times claims “the reversal of Roe further undermines majoritarian rule and feeds the image of the justices as nothing more than partisans in black robes.” In a piece labeled “the real culprit,” The New Republic lectures its readers to “Blame the Electoral College.”

Yet, what the Court is poised to do is restore democratic control. When the original Constitution, as well as the Fourteenth Amendment, was written and ratified, abortion was left to the states. No one at that time believed the laws they wrote, debated, and voted on required states to allow any abortions, let alone all abortions and some instances of infanticide after birth.

Those lawmakers faithfully represented their constituents. It’s worth noting that those who considered such issues understood themselves as part of a long story of progress in the treatment of children. Ancient Israel had banned human sacrifice, contrary to many of their surrounding tribes. Pagan Greece and Rome had allowed the killing of babies, often by “exposing” them to natural elements and wild animals, as well as by abortion, but Christians worked to end these and other abuses of the young and vulnerable.

Banning human sacrifice, abortion, and other forms of abuse or killing of vulnerable people was a hallmark of civilization. Thus, the Americans who wrote the Constitution and the 14th Amendment, like many today, viewed abortion and euthanasia not as progress, but as regress to barbarism. Like it or not, that is the democratic reality behind the constitutional provisions at issue.

Of course, those who wrote the Constitution allowed for it to be amended. This has happened 27 times on issues ranging from civil rights to presidential elections and succession. Amending is a democratic process, controlled by the people’s elected representatives in state legislatures and Congress (and potentially on the people themselves in ratification conventions).

Yet, those who favor unlimited abortion, and sometimes infanticide after birth, are totally uninterested in this democratic process. When was the last time you heard a pro-abortion activist talk about amending the Constitution? Instead, they are fixated on the Supreme Court.

They want five judges to nullify the democratic actions of previous generations. And they want five judges to preclude any democratic lawmaking activity on these issues within the states today. They implicitly recognize that when this issue is left to democracy, they lose (according to their own goals, which polls consistently show are far outside mainstream American public opinion).

And yet pro-abortion activists lambaste the Court and the Electoral College? The point of an independent judiciary is that it is supposed to limit itself to saying what the law—passed by the people’s representatives—means, rather than making it up as they go along. And the Electoral College is, in fact, a two-step democratic process. Many countries use similar multi-stage elections (like parliamentary systems) at the national level to limit regionalism and force greater compromise and collation building.

On the Left, “democracy” seems to mean nothing more than “getting whatever we want.” This is more than obnoxious, it’s dangerous, since the concept is intertwined with constitutional government. If the Left convinces Americans that democracy is just another partisan tool of control rather than a process to create representation and accountability, they undermine faith in the very structures that make government by consent possible. This is the real war on democracy going on today in America.