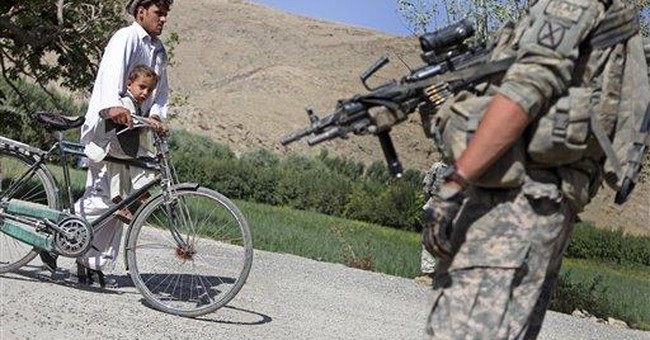 Franklin Roosevelt was famous for being able to give people on all sides of a policy dispute the impression that he supported each person's position. Such artfulness helped him manage domestic politics for 12 years in the presidency. Similarly, President Obama wrote in his book "The Audacity of Hope" that "I serve as a blank screen on which people of vastly different political stripes project their own views. As such, I am bound to disappoint some, if not all, of them."

All politicians -- indeed all people -- permit such ambiguous perceptions of themselves from time to time. But for presidents, it is vital that such ambiguities support, not undermine, their policy objectives. And, as important articles in the Washington Post and the U.K. Guardian last weekend disclose, there is major confusion at the highest levels over what the president's policy is in Afghanistan.

The confusions as to intentions, strategies and exit timing started immediately after the president's Dec. 1 speech, and have gotten dangerously worse in the ensuing month. Defense Secretary Robert Gates, Secretary of State Hillary Clinton, Chairman of Joint Chiefs Adm. Mike Mullins and the top generals all said we were there to win and the July 2011 exit date was conditional on whether enough had been accomplished by then. White House spokesman Robert Gibbs, adviser David Axelrod, Chief of Staff Rahm Emanuel, Vice President Joe Biden and the president all indicated July 2011 was real, and senior White House sources said "winning" was not an objective.

In an extraordinary example of expository journalism on the front page of last Saturday's Washington Post, Rajiv Chandrasekaran laid bare the shockingly different understandings of the Afghan mission held by the White House and the Pentagon (see "Civilian, military planners have different views on new approach to Afghanistan," The Post, Dec. 26).

There are three broad areas of "misunderstanding." First, Gen. Stanley McChrystal believes he is allowed to build up Afghan troop levels to 400,000. The president's objective is 230,000. With 400,000, we would be at about the minimal total troop level that the Army and Marine manual says is required to win a counterinsurgency war.

Second, the July 2011 drawdown (exit) date has lead military commanders to accelerate pace of operations in order to attain victory quicker, while White House sees it as intended to "narrow" the scope of operations. So ragged are the communications between the White House and the military that, according to the Post article: "a senior administration official said the National Security Council (in the White House) is discussing ways to increase monitoring of military and State Department activities in Afghanistan to prevent 'overreaching.'"

Third, the objective of the mission is badly divergent between the White House and the military. According to The Post: "The White House's desired end state in Afghanistan, officials said, envisions more informal local security arrangements than in Iraq, a less-capable national government and a greater tolerance of insurgent violence" (which sounds like a formula for the Karzai government to fall to the Taliban once we leave). The White House expressly instructed Gen. McChrystal not to use the term "Defeat the Taliban."

Yet when Gates subsequently visited Kabul, he told the military personnel that "we are in this thing to win." The Pentagon later explained that use of the word "win": "From a moral perspective, when you ask soldiers and families to sacrifice, we do that to win. We need to be able to articulate winning." Or as I argued in a column a few months ago, it is heartless to ask a solider "to die for an exit strategy."

However, regarding the ambiguity of the July 2011 deadline, a senior Democratic staff member in Congress told The Post: "Is the surge a way of helping us leave more quickly, or is the timeline a way to help win support for the surge? Which is the strategy and which is the head fake? Nobody knows."

A senior officer is quoted in the article saying they "don't know if this is all over in 18 months, or whether this is just a progress report that leads to minor changes. Until they tell us otherwise, we're operating as if the latter is the policy."

Well, perhaps some officers think that, but several of the troops I have either talked to directly or heard from indirectly say they assume we are short timers -- and they have no desire to be the last guys to die in a losing war.

Strategic ambiguity is useful when confounding the enemy. It is worse than dangerous, and should be promptly rectified, when it confuses and dispirits the president's own generals and troops -- while unintentionally encouraging the enemy to fight on.