Lessons From a Dance Slav 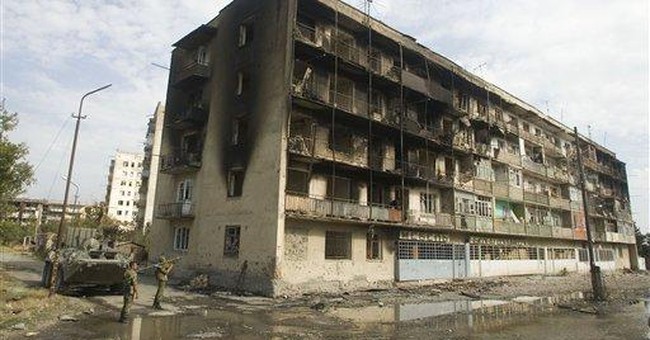 "It's hard for us to understand what the Russian plan is," said a senior U.S. official who briefed reporters over the weekend on the Russian invasion of Georgia. One must hope that the claimed bafflement at Russian intentions is merely one of those diplomatic lies that honorable statesmen are obliged to recite from time to time.

In fact, Russian intentions are quite clear. Georgia has cozied up to Uncle Sam as part of a nearly two-decades-long effort by the United States to bring the former non-Russian Soviet republics and formerly captive eastern European nations into the American-led sphere of influence -- and out from under Russia's historic suzerainty over the lands just beyond its border.

America's aggressive diplomacy in this regard was heightened recently when -- at the NATO summit in Bucharest, Romania, this year -- it pressed for Georgia's and Ukraine's memberships to the alliance. Moreover, America and Britain have been providing military assistance to the Georgians in the form of arms and training. As the British newspaper The Times noted: "(That) support is aimed at encouraging the rise of Georgia as an independent, sovereign state."

Did our government assume that we could continue to bait the Russian bear in his cave and not eventually get his claw thrashed against our face?

Since the commencement of Russian military hostilities, President Bush has been making loud and emphatic demands for Russia to cease and desist its military assault on Georgia. Of course, with the Russian Black Sea fleet cheerfully banging away at the Georgian coast with no U.S. naval opposition; the Russian air force bombing Georgian cities with no air defense from the U.S.; and Russian tanks rolling into little Georgia with no plausible U.S. Army forces available to give Czar Putin even a second thought, President Bush's words are worse than meaningless. They in fact have the meaning that the weakened statuses of America militarily, diplomatically, economically and on the basis of our negative energy position have stripped an American president's cautionary words of any power. Rather, they encourage others to ignore our threatening words. A nation that threatens without the perceived capacity to carry out the threat is a mockery of a great power.

John McCain, technically correct, said, "Tensions and hostilities between Georgians and Ossetians are in no way justification for Russian troops crossing an internationally recognized border." But of course, Russia wasn't looking for a justifiable and proportional act; it was looking to begin to regain power on its western and southern borders.

Meanwhile, Barack Obama stated that the military escalation resulted from the "lack of a neutral and effective peacekeeping force operating under an appropriate U.N. mandate." This naive and legalistic assertion completely misses the point of international relations. Peacekeepers are not intended to fight Russian tanks. There is no peace to be kept. Russia invaded because it could, and the Russians saw it in their interest to do so. This wasn't a mismanaged peacekeeping effort. This was a mismanaged foreign policy from Washington because it attempted to gain American influence against Russia without provisioning sufficient American power -- military, economic and energy-based -- to sustain our policy when challenged by Russia, as surely we would be eventually, as in fact we now have been.

Three successive presidents (Bush, Clinton and Bush) have followed Henry Kissinger's early post-Soviet advice to push the line between the West and Russia as far east as possible. It is a sensible policy, as long as it is supported by adequate material means and executed with some diplomatic deftness. But each of those presidents has overseen -- at the same time that they asserted our influence farther east -- the reduction in our fighting land, sea and air forces. And both Clinton and the current Bush have been anything but deft. Clinton, after all, went to war, bombing civilian Serbian cities for two months against Russia's little Slavic brother. And the current President Bush overplayed his weak hand in Bucharest when he called for Georgia's and Ukraine's admissions into NATO (and got turned down even by our NATO allies).

None of this excuses Russia's rude assertion of military power against little Georgia. But here in America, our condemnatory words will have little effect on Moscow. We can influence Moscow (and other restless aggressors) only by building our own nation's strength back to the point that our words alone mean something internationally. And our words alone then will mean something because they will not be completely alone; they will be backed by our real, usable strength. In large part, that is what our presidential election ought to be about: how to strengthen our blessed land -- with overawing military strength, a bountiful and independent energy supply, and a strong and prosperous free market.