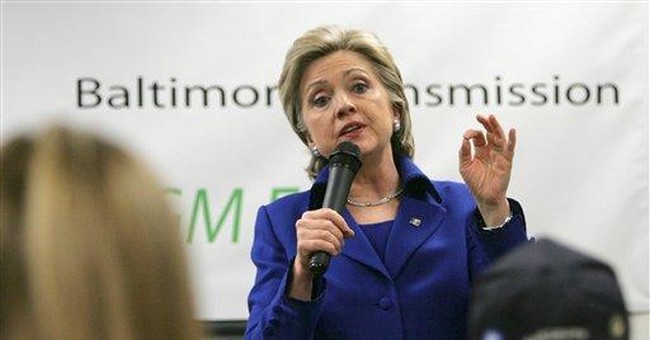 Every political season has its pleasures. With the accelerated metabolism of the frenzied fight for Super Tuesday now behind us, the two parties are settling in for the more discreet political pleasures of late winter and early spring. Republicans are entering the teeth-gnashing stage, as they come to reluctant terms with their ideologically cross-dressing ancient mariner nominee. Sen. McCain is condemned to wander about with the albatross of his former conservative apostasy around his neck. I suppose he hopes that he will be excused, just as the mariner is in the poem "The Rime of the Ancient Mariner." Eventually, the mariner's curse is lifted when he sees sea creatures swimming in the water. Although earlier in the poem he had called them "slimy things," he eventually sees their true beauty and blesses them: "A spring of love gush'd from my heart and I bless'd them unaware."

But for the political gourmand, it is the Democratic Party's race that offers the more delectable morsels. Obama, the young Icarus, flies gorgeously above the clouds -- shining, perhaps ominously, in the blazing sun. Meanwhile, Hillary, the earthling, looks over her hunched shoulder, snarling to keep her reluctant followers from raising their vision to the hopeful sky: "And, therefore, since I cannot prove a lover, to entertain these fair well-spoken days, I am determined to prove a villain, And hate the idle pleasures of these days. Plots have I laid, inductions dangerous, By drunken prophecies, libels and dreams " ("Richard III").

Her practical problem at the moment, as a shrewd Democratic strategist pointed out to me earlier this week, is that she runs the risk of having the Giuliani problem: going for a month without winning any primaries or caucuses. Most experts don't expect her to win any more until the March 4 elections in Texas, Ohio, Vermont and Rhode Island. In a normal primary season, one would expect that Obama's string of victories that started last weekend would give him the momentum to overcome, by March, his current deficits in Ohio and Texas. But so far this strange season, momentum has been the dog that didn't bark. If that pattern continues, perhaps Hillary can wait through the "winter of her discontent" and come back strong in March. But the dangers of momentum returning and the Giuliani effect kicking in clearly have driven the Clintons to various "plots, libels and dreams."

You may have noticed that both the Clintons and Obama are making the case for why they are more electable. That is fair enough and standard procedure (remember John Kerry's 2004 argument in Iowa and New Hampshire that he was the more electable candidate). But the Clintons seem to be bruiting about some rather less pleasant versions of the argument. (I don't know whether it's the Clintons in each case, but on the principle of cui bono-- who benefits -- it's a reasonable assumption.)

Starting about a week ago, we started seeing references in the national media (ABC, The New York Times, Los Angeles Times) to Obama spawning a "cult of personality" -- a theme that had existed back in Illinois for some time but mysteriously didn't substantially appear in the national media until about Super Tuesday. The maxim in political strategy is always to go at your opponent's strength.

If you turn him on that, the battle is over. So, the cult of personality perfectly targets his strength: that Obama has a wonderful personality. The Clintons (presumably) are suggesting, in effect, that he may be delectable, but he's not electable; that it is unhealthy to adore a leader -- undemocratic, in fact.

But beyond that are dark hints of yet to be revealed facts about Obama. I was chatting with a senior Clinton surrogate in a cable TV green room late last week -- a former Clinton White House senior appointee. He mentioned to me that, while they couldn't bring it up, Obama said (unspecified) things back when he was in the Illinois Senate that may be on news videotape. He said it was way beyond what a general election electorate could swallow (implicitly: too leftish for the public). Obama is just not electable, he suggested.

Undergirding the entire "unelectable Obama" message is the perhaps racially polarized electorate. While many commentators beyond the Clintons are suggesting this, it was, of course, the Clinton team (starting with Bill) who actually tried to induce the condition by playing the race card.

So, the quiet Clinton message for the time being is that Obama may be winning now, but he can't win in the fall; while Hillary may be losing now but is the Democratic Party's great white moderate November hope. Don't expect to see Hillary's version of the audacity of hope published with her name on it. But you will be reading it in your favorite news outlet nonetheless.