The “MARCH FOR LIFE” Litmus Test

Tom Tradup
|
Posted: Jan 25, 2017 12:01 AM
Share   Tweet
The opinions expressed by columnists are their own and do not necessarily represent the views of Townhall.com. 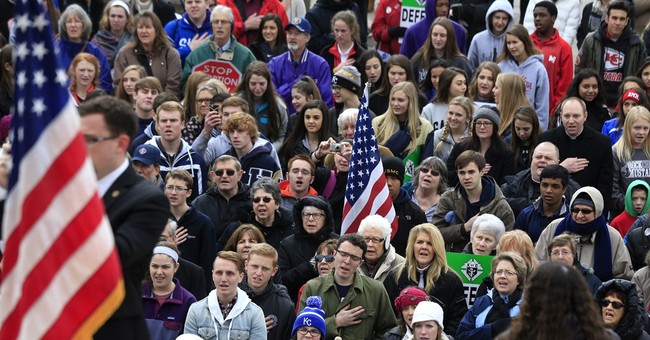 NEWS ON THE MARCH: While we’re only a few weeks into 2017, it may nevertheless be the understatement of the year that the Mainstream Media are living—as an old Chinese curse suggested---“in interesting times.”

It is undeniable that CNN, The Associated Press, The New York Times and others blew their credibility to bits in the 2016 election: first by ignoring Donald Trump, then exploiting him for TV ratings and online clickbait and—eventually—blatantly ridiculing any chances he had of winning the Presidency. Their irresponsible hammering of Trump in the final weeks of the campaign—coupled with simultaneously propping-up the moribund Hillary Clinton and “using all your skills, all your talents” (as Vito Corleone implored Bonasera the undertaker in The Godfather) shouting hysterically 24/7 about polls showing Secretary Clinton was headed for an inevitable November 8th landslide—tore back the façade of professionalism and journalistic ethics for everyone to see. And that toothpaste can’t easily be put back in the tube.

So after America was treated the delicious spectacle of their hangdog scowling as the 2016 returns flipped state-after-state into the red TRUMP column handing him the Presidency (despite Mrs. Clinton being endorsed by virtually every newspaper—remember them?—in America and Rachel Maddow appealing to her literally dozens of MSNBC viewers to turn out and break that final “glass ceiling”) did our TV and print friends decide to at least pretend to be contrite and examine how tone-deaf they were to the Americans who delivered 306 Electoral College votes to Donald J. Trump?

Nope. The Mainstream Media actually doubled down…with network anchors like Wolf Blitzer and George Stephanopoulos clinging to Mrs. Clinton having won the “popular vote” by nearly 3-million votes (even though most of them were in only one state: California.) And fawning over Meryl Streep’s smarmy, holier-than-thou whining at the Golden Globe awards at what she called Donald Trump’s performance which “stunned” her and “sank its hooks in my heart.”

And not satisfied with nightly updates on the “growing numbers” of mostly-backbencher members of Congress who would boycott the Inauguration of our 45th President, CNN one-upped cable competitors by irresponsibly broadcasting its own version of ABC’s Designated Survivorseries…suggesting a way the Obama Administration might remain in power if “an incoming attack” were to occur during the transfer of power on January 20th killing the President-elect, Mike Pence, Congressional Leaders and members of the Supreme Court. (Keep in mind this was the same network that virtually wet its pants in outrage when Rush Limbaugh referred to Georgetown University law student Sandra Fluke “a slut.” But in 2017, its okay for them to offer assassination scenarios?)

Which brings us to “the marches”…one last weekend, one still to come. As the so-called “grass roots” Women’s March on Washington unfolded last Saturday, network TV ignored the links a simple Google search showed, tying over 50 of the organizations involved to funding by billionaire malcontent George Soros. Instead, they beamed nationwide—and, in the case of Voice of America, globally—the “outrage” of allegedly spontaneous protesters over the Inauguration of Donald Trump. A highlight was Madonna (apparently auditioning as a future CNN anchor) delighting the mob by explaining how she has “thought an awful lot about blowing up the White House.” Lewd signs, vapid Hollywood actresses reading ‘poems’ of questionable iambic pentameter…all beamed into homes here and abroad. Media-think is: “If people are marching, its news.”

Thankfully, there may be some common sense on the horizon…at least at taxpayer-funded Voice of America. This week, two principled young conservatives—Matthew Ciepielowski and Matthew Schuck—parachuted into VOA headquarters at 330 Independence Avenue in D.C. as part of the Trump transition team overseeing this $800-million operation. Predictably, upon their arrival some offices recently festooned with Obama or Clinton photos and memorabilia were squeaky-clean as if having been visited by Red Reddington’s ‘cleaner’ on The Blacklist. But that won’t fool people for long if the on-air product isn’t balanced.

This Friday in Washington, there’s a perfect litmus test by which to gauge the ‘objectivity’ of broadcasters: the 44th annual MARCH FOR LIFE. Hundreds of thousands of pro-life demonstrators are expected to gather in opposition to the tidal wave of abortions unleashed by the Supreme Court’s 1973 Roe v Wade decision. Few, if any, MARCH FOR LIFE participants are expected to be sporting obscene signs or hats shaped like female genitalia. And none will offer thoughts of “blowing up the White House” as the Women’s March did.

Former U.S. Senator and Presidential candidate Rick Santorum will be there in-person. So will Charmaine Yoest. Salem Radio Network host Mike Gallagher will originate his national talk show from the middle of the MARCH FOR LIFE on Friday. The big question is: will CNN be there? Or Voice of America? Or the New York Times? And—if yes—will their coverage be non-stop and positive like the parade of demonstrators they presented last weekend?

The media’s litmus test is teed-up. Let’s see how many “news” organizations actually take it. More importantly, how many will pass the test?