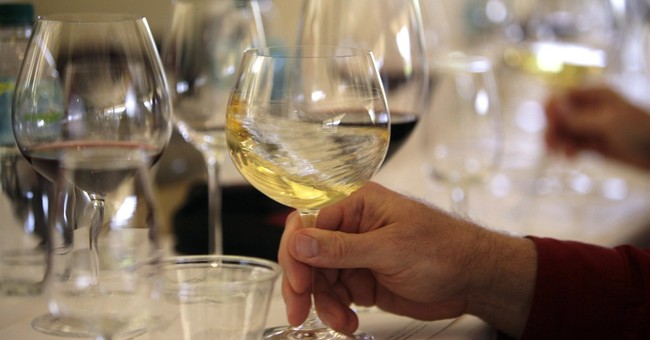 After I read the news report, I popped the wine cork and praised the science gods. Alcohol consumption helps us live longer.

A new study, published in the journal "Alcoholism: Clinical and Experimental Research" found that teetotalers are more likely to croak sooner than regular drinkers.

If you don't understand what a massive turn of events this news represents - a vice has been turned into a virtue - you need to go back a little ways.

When I was a kid in the 1960s, breakfast consisted of sausage links and fried eggs. Lunch, for adults, consisted of three martinis. And dinner consisted of a fat, juicy steak with a potato smothered in butter, washed down with a pitcher of beer. We didn't know this stuff was bad for us, just that it was tasty.


But around the 1970s, the onslaught began. People like Jim Fixx, a former fat guy who lost weight by jogging, initiated the jogging fad. That was followed by the aerobics fad in the 1980s when Jane Fonda got richer wearing bright leotards and showing people how to dance themselves fit.

At the same time, scientists began attacking American cuisine with great earnestness. They said cholesterol, fat and salt were bad. They said alcohol was the devil's brew. Their scientific methods appeared to be pretty simple: If it tasted good, it was bad.

Things only got worse from there as several studies began singling out all kinds of goodies.

Scientists said Chinese food had enough fat and goop in it to clog the arteries of a rhino. They said delicatessen sandwiches contained enough creamy mayonnaise, dry Swiss cheese and fatty corned beef to turn a Madison Avenue model into John Madden. They said the cream sauce in Italian foods would kill you faster than the opera. They even singled out theater popcorn, telling us it was worse than arsenic.

By the 1990s, American life was pretty glum. Scientists took a more positive approach and started telling us what was good for us.

And now, in the 2010s, their advice is changing again. Many scientists say that alcohol isn't so bad, after all - that those who never drink are more prone to dying sooner than moderate drinkers who imbibe on a regular basis. (So it's true that non-drinkers don't live longer. It just seems longer.) The study speculates that drinkers are more social and have stronger networks of friends, which is good for one's health, whereas non-drinkers have less-cheerful social lives and suffer higher levels of depression, which is bad for one's health.

In any event, my scientist friends, now that you are doing studies that we can live with, why not keep the good work going? Weren't you working on an exercise pill that can trick the chemical pathways that our muscle cells use into thinking we are actually exercising?

While you perfect that, can you please discover some healthful benefits in cheeseburgers, chocolate mousse, ice cream, sausage links and sitting on the couch all weekend eating Doritos?

I'll be happy to discuss these suggestions in person. You can find me at the pub expanding my social network, staving off depression and enjoying my good health.