Tom Hebert
|
Posted: Feb 06, 2021 12:01 AM
Share   Tweet
The opinions expressed by columnists are their own and do not necessarily represent the views of Townhall.com. 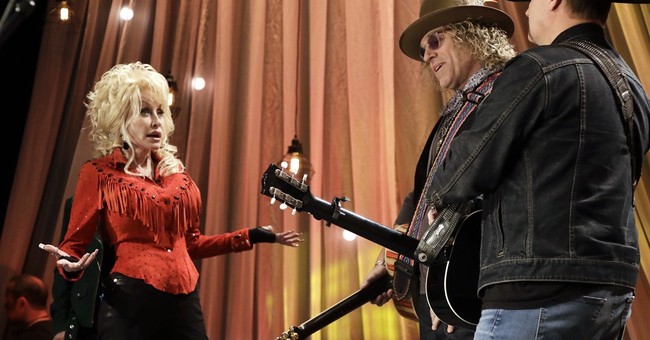 In her first-ever Super Bowl ad, country icon Dolly Parton has partnered with website company Squarespace to champion the millions of Americans working hard to unlock their economic freedom through a side hustle.

Unfortunately, Parton’s embrace of the all-American entrepreneurial spirit has made her a target of left wing commentary sites and angry bluecheck liberals on Twitter. Instead of celebrating side gigs for allowing Americans to pursue economic freedom on their own terms, the left wants to destroy side hustles and force all Americans to have a boss.

The Super Bowl ad updates Parton’s classic smash hit “9 to 5” to reflect the modern economy. The new tune, “5 to 9,” encourages entrepreneurial Americans to chase their dreams in their off-hours with lyrics like: “Well you got dreams and you know they matter / Be your own boss, climb your own ladder” and “Gonna move ahead and there’s nothing you can’t do / When you listen to that little voice inside you.”

This sunny refresh is in sharp contrast to the original song, which described workers as “...just a step / on the boss man’s ladder” while still acknowledging that workers had dreams that the boss will never be able to take away.

In 1980 when the original song came out, workers being crushed by dead-end jobs had very few opportunities to chase those dreams and break free from their totalitarian bosses. The technology just wasn’t there. In the new song, Parton’s message is crystal clear – you can finally chase your dreams and become your own boss thanks to the gig economy.

Modern technology has enabled millions of Americans to carve out a viable and flexible career for themselves outside of normal work hours. Think of a single mom selling homemade soap on Etsy, a graphic designer building up a client base or an Uber driver putting the extra cash he earns towards starting a business of his own. These are real Americans pursuing their passions without anyone telling them what to do.

You would think that Americans of all political stripes could come together in celebration of these freelancers and their vibrant contributions to our society. Think again.

Liberals are furious with Parton for daring to encourage Americans to be their own boss. Left-wing blog Jezebel called the ad “bleak sh*t,”while the liberal website Slate somehow interpreted the ad’s message as being supportive of kicking women and people of color out of the workplace.

Of course, these hot takes are silly and unserious. However, Democrats on Capitol Hill are pushing real legislation that would punish workers and independent contractors.

The job-killing PRO Act would ban Right to Work laws that protect 166 million workers in 27 states, more than half the U.S. population. Right to Work laws allow workers the freedom of employment without forced membership in a union or mandatory payments to a union boss. Even more ominously, the PRO Act would force employers to provide the personal contact information of employees to unions during organizing efforts, including home addresses and personal phone numbers. This would give union bosses free reign to harass and bully employees into joining unions at the expense of worker privacy.

The PRO Act would be a death blow to the gig economy by imposing California’s “ABC” test for independent contractors at the federal level. The ABC test, codified under California’s disastrous AB5 law, has forced the reclassification of hundreds of thousands of California’s workers and limited opportunities for freelancers statewide. A nationwide ABC test would threaten the more than 57 million Americans that engage in freelance work.

Ultimately, Parton’s Super Bowl ad celebrates every single American that pursues success and happiness through freelance work. Instead of joining Parton in celebrating these workers, the left wants to crush their side hustles, bully them into joining unions, and force them to have a boss.