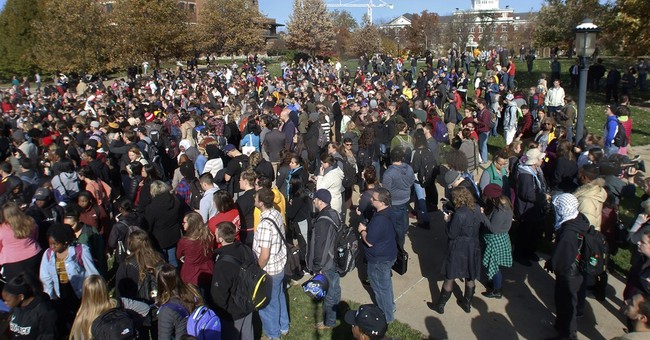 What kind of environment should be tolerated on America’s college campuses? Recent high-profile student protests at several schools allege bigotry and intolerance based on words. Free speech is in play. But there is a stark difference between perceived bias and real discrimination.

Factoring in the “urgency” created by 24-hour news coverage, the recent spate of student protests and, in a couple of cases, the ouster of two university presidents and a chancellor, belies the fact that there is an all-too-real civil rights threat on the rise on college campuses.

Organized, coordinated campaigns involving outside groups, some students and even some faculty have fueled a toxic campus environment in which Jews and Christians have been blamed for global and social policy. Ostensibly motivated by geo-political issues involving Israel and the Middle East for the former, and institutionalized bias against traditional expressions of faith for the latter, the efforts have made actual violence and physical harassment a reality in hundreds of unreported or underreported cases in the past decade. These incidents are increasing in frequency.

In short, Jews and Christians are targets at American universities.

This is a far cry from the angry complaints about “marginalized student groups” covered widely in current media. While we must always be on guard against institutionalized racism that may violate protected personal liberty, the new popular culture glorifies outcry for its own sake. It’s trendy to be offended by words. Hurt feelings justify lashing out. Concern with what others say, or think, turns quickly to protest, amplified through the megaphone of contemporary “victimization.”

Contrast this with actual malice – real violence, harassment, and acts that recall the horrors of past atrocities and are occurring with startling regularity on the university campuses we have believed were safe harbors for expression and dissension. These are the trends that should cause legal advocates across the ideological spectrum to take notice. They are violations of constitutional civil liberties.

Over the past decade, college campuses have experienced a rising tide of anti-Semitism, including violent attacks and threatening behavior against Jewish students. In many cases, the acts have come as a result of student-on-student violence fed by the heated rhetoric of pro-Palestinian and Islamist organizations actively pursuing political agendas on campuses, with Jewish students and Israel regularly compared to Nazis.

Likewise, Christians on college campuses have increasingly become the focus of overt, hostile behavior by some academics and various student organizations supported by national (and international) sources. Instances of targeting have become commonplace on many large American campuses.

Compounding the situation, many prominent universities have failed to adequately enforce legal policies designed to protect students against religious and ethnic harassment. A number of universities have no policy at all, according to Freedom of Information Act (FOIA) responses received by our office.

Further, the current U.S. Department of Education has failed to vigorously enforce civil rights anti-harassment laws involving colleges and universities that receive federal funding, allowing a dangerous atmosphere of mistrust, hate and violence to fester against Jewish and Christian students on many campuses. Despite clear prohibitions against various forms of discrimination under Title IV of the 1964 Civil Rights Act, the lack of investigation and, where necessary, enforcement against institutions receiving federal funding is startling.

To be sure, the natural tension between the limits of free speech and the protection of civil liberties against real discrimination creates a balancing act under the Constitution. To weigh too far in one direction risks destroying the other.