Todd Starnes
|
Posted: Aug 30, 2021 11:13 AM
Share   Tweet
The opinions expressed by columnists are their own and do not necessarily represent the views of Townhall.com. 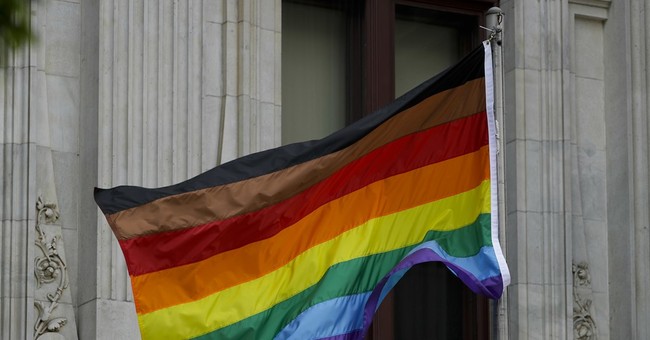 A California school district says they are investigating a video that purportedly shows a teacher telling students to pledge allegiance to a gay pride flag.

The teacher, whose identity cannot be confirmed, boasted about removing the American flag from her classroom during the China virus pandemic.

"I took it down during COVID because it made me uncomfortable. I packed it away and don't know where and I can't find it yet," the teacher said in a now-viral TikTok video.

This is yet another example of how radical leftists have turned our classrooms into propaganda camps. I wrote extensively about this in my book, "Culture Jihad: How to Stop the Left From Killing a Nation."

The teacher said students are required throughout the school year to take part in the pledge every afternoon.

One student pointed out that there was no American flag to pledge allegiance to in the classroom.

"I tell this kid we do have a flag in the class that you can pledge allegiance to," the giggling teacher said, pointing at the Gay Pride flag.

In a separate TikTok post, the unidentified teacher was decked out in rainbow color while she recited, "I pledge allegiance to the queers.”

Among those outraged by the teacher’s behavior was former Trump administration official Richard Grenell.

“What kind of parent would allow their child to be taught by this wacko,” the openly gay pundit said. “Why are parents turning their kids over to someone they don’t know. I’d like to talk to people who think this is good.”

School district spokesperson Annette Franco told The Todd Starnes Radio Show that the district is aware of the incident.

"I assure you that we take matters like this seriously and are taking action to address it," Franco said. "Showing respect for our nation’s flag is a value that we instill in our students and an expectation of our employees."

People often ask me why our nation's culture and values are rapidly changing. This is the reason why - the left has taken over our public education system and they are churning out generations of anti-American socialists.

You need to get your kids and grandkids out of public schools. Homeschool or private school - that's the only way to save our nation.

And that teacher needs to be fired.