Todd Starnes
|
Posted: Feb 26, 2018 5:00 PM
Share   Tweet
The opinions expressed by columnists are their own and do not necessarily represent the views of Townhall.com. 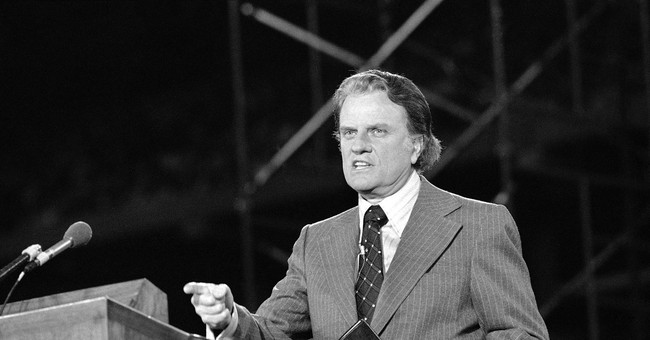 I would expect to read such anti-Christian mockery in the pages of The New York Times and Washington Post, but not National Review. My, how times have changed.

“Prophets take adversarial stances toward their times, as did the 20th century’s two greatest religious leaders, the Rev. Martin Luther King Jr. and Pope John Paul II. Graham did not. Partly for that reason, his country showered him with honors,” the self-described atheist wrote.

Will went on to describe Graham as an “entrepreneurial evangelical who consciously emulated masters of secular communication.”

He also derided those who walked the aisle to accept Jesus Christ as their Lord at Graham’s crusade meetings.

“His audiences were exhorted to make a ‘decision’ for Christ, but a moment of volition might be (in theologian Dietrich Bonhoeffer’s phrase) an exercise in ‘cheap grace.’ Graham’s preaching, to large rallies and broadcast audiences, gave comfort to many people and probably improved some,” Will wrote.

Robert Jeffress, the pastor of the First Baptist Church in Dallas and a spiritual advisor to President Trump, delivered a blunt rebuke of the so-called conservative writer.

“George Will’s article reveals that he is neither a conservative nor a Christian,” Jeffress told the Todd Starnes Radio Show.

Some of the nation’s leading Christian leaders were also quick to condemn Will’s ugly screed.

“When I read Will’s column the image that came to mind was of an ignorant Pekingese yapping at the heels of a spiritual Great Dane,” the noted seminary president remarked.

Of Graham’s theology, Will referenced an off-hand question he answered regarding his belief in miracles.

“Billy Graham answered: Yes, Jesus performed some and there are ‘many miracles around us today, including television and airplanes.’ Graham was no theologian,” Will wrote.

“Graham was a solid theologian, standing for the inerrancy of Scripture, the exclusivity of salvation in Jesus Christ and the fundamentals of the faith,” Caner told me.

Will also brought up an infamous Oval Office conversation the evangelist had with President Richard Nixon regarding Jews in the media.

“One can reasonably acquit Graham of anti-Semitism only by convicting him of toadying,” Will wrote.

Caner called that Will’s greatest misstep in the hit piece – feeding the liberal media’s narrative that Graham was an anti-Semite.

“Will never mentions Graham’s apology years later and the Jewish community’s acceptance of the apology. Will never mentioned how Graham visited the newly formed state of Israel in 1960 when such a visit was unpopular in many Evangelical circles. Will never mentioned that it was Graham who personally brought the plight of Soviet Jews to the attention of President Nixon,” Caner said.

In spite of the shameful smear, I doubt Billy Graham would’ve been all that bothered.

I reckon he would’ve smiled at George Will and reminded him that we are all sinners and that God loves him and wants to have a relationship with him.