Students Break Out in Song During Tornado Warning

Todd Starnes
|
Posted: Dec 01, 2016 11:14 AM
Share   Tweet
The opinions expressed by columnists are their own and do not necessarily represent the views of Townhall.com. 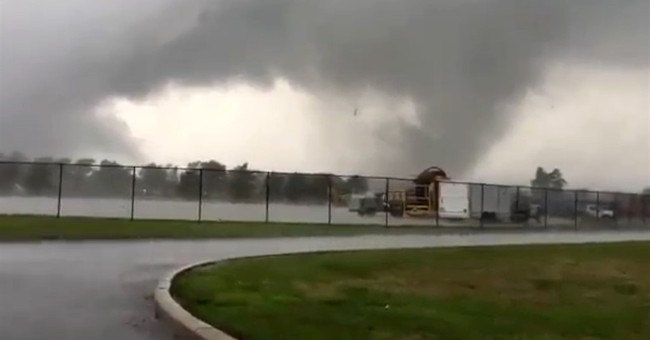 Bremen High School teacher Jessica Labbe knew there was severe weather in the forecast. A line of powerful thunderstorms was about to hit Haralton County, Georgia.

Just after lunch, the tornado sirens began blaring across town. And inside her classroom, cell phones beeped and buzzed – warning students of dangerous weather.

Teachers ushered their students into a hallway so they could be sheltered from the storm.

“When something like that happens, you worry about kids being upset, people being nervous. I have two kids of my own at the elementary school. You’re immediately worried.” Mrs. Labbe told me. “Already running through my head, I’m praying and thinking – how can I calm these kids if anybody does start to panic?”

And just like that something remarkable happened – many of the teenagers began to spontaneously sing. Just watch:

It turns out a number of the students sheltering in the hallway were members of the school’s show choir.

They sang several songs – but it was there was one song in particular that made national headlines. It was a beautiful rendition of the popular Christmas song, "Mary Did You Know?" and it was filmed by Mrs. Labbe.

“They started singing and everybody calmed down,” she said.

Mrs. Labbe is a devout Christian who leads the school’s Fellowship of Christian Athletes chapter.

She posted the video on Facebook and it went viral.

"Who is afraid during a tornado watch/warning at BHS...not me because i'm reassured and reminded today that Mary's baby boy has got this," she wrote on Facebook.

It was just a breathtaking moment.

“I could feel the Spirit fill the hallway as they sang,” she said. “It was just a real calming feeling when they started singing that song.”

And just as the show choir concluded the song, their classmates applauded and then the principal announced that the storm had passed.

Students shuffled off to class and teachers resumed their lessons and life returned to normal at Bremen High School.

As the songwriter wrote, Mary's baby boy calmed the storm with his Hand.