Border Patrol: 'This is The Dream of Every Terrorist in the World' 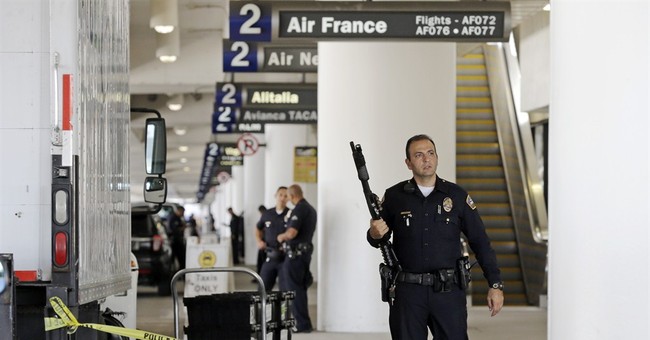 The Transportation Security Administration is strongly denying accusations that it has been allowing illegal immigrants to board American jetliners without proper identification.

The National Border Patrol Council, a union representing thousands of Border Patrol agents, accused the TSA of letting illegals board airplanes with a “Notice to Appear” document instead of a passport or official government identification card.

Union leaders said illegals were allowed to board jetliners without proper identification at airports in El Paso and Laredo, Texas. The story was first reported by Breitbart News.

“This is the dream of every terrorist in the world,” Shawn Moran, vice president of the union, told me. “There is no way of knowing who is on board the jetliners.”

Whenever illegal immigrants are processed, Moran said, they are released with a “Notice to Appear” document. He said that’s the document they are using to fly commercially in the United States.

“This is a document that could easily be forged,” Moran told me. “It is simply a computer printout with a name on it.”

He said border agents in Laredo asked the TSA why they would allow illegals to board jetliners with the “Notice to Appear” document.

“They said, ‘You guys issued it to them so we’re accepting it,’” Moran told me. “It doesn’t make sense.”

Judicial Watch, a conservative legal watchdog group, confirmed through an unnamed high-level source within the Department of Homeland Security that illegals were allowed to board jetliners in El Paso without identification.

“TSA is letting them go around security,” the source told Judicial Watch. “No picture ID, just a slip of paper.”

Not true, the TSA tells me.

“These reports are false,” the TSA said in a statement. “A Notice to Appear, issued by the Executive Office for Immigration Review (EOIR), is not an acceptable form of ID at the TSA checkpoint.”

All travelers must have a valid form of identification, the TSA stressed.

“For Mexican nationals without a passport who are returning to Mexico, they can be issued a Certificate of Presumption of Nationality of Mexico (CPNM) by the Government of Mexico,” the TSA statement read. “TSA has established a robust verification process of a CPNM, which includes a photograph. At the checkpoint, this documentation will be authenticated by TSA’s Identity Verification Call Center (IVCC), the same center that processes U.S. travelers who may have lost, or forgotten, their government-issued ID. Once this process is complete, the passenger will undergo enhanced TSA screening.”

Moran said the union decided to go public with the accusations after their concerns were unheeded by the TSA.

“The Border Patrol is not in the business of providing government IDs,” he said. “These documents should not be used to establish identity or to allow people to use the transportation system.”

He said the border agents in Laredo tried to explain to the TSA how easily the documents could be forged – but their concerns were not addressed.

“It’s unbelievable that another government agency would take a simple piece of paper that could be forged by anyone with a home computer and use that as a valid form of ID to travel,” he said.

Moran warned that the TSA’s alleged actions put the country at risk.

Just something to think about the next time the TSA takes personal liberties with your private parts.