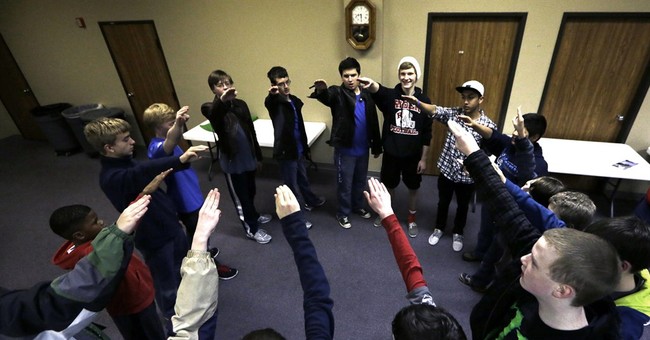 “I was horrified,” said John Stemberger, chairman of the board of Trail Life USA, a new, rapidly-growing scouting organization that doesn’t allow openly gay members.

Stemberger was referring to an Associated Press photograph that accompanied an in-depth story about Trail Life. The image showed a group of young boys gathered in a circle with their hands raised at an unusual angle. The AP’s original caption on the photo said they were reciting the organization’s “creed” during a meeting in North Richland Hills, Texas.

It took the AP several days to acknowledge their error. But by then, the unfortunate comparison to Nazi Germany had spread on the Internet faster than Hitler’s invasion of Poland.

“It looks like some kind of German salute that was used during the Nazi period,” Stemberger told me in a telephone interview.

The photograph ran last Sunday in newspapers across the nation and generated hundreds of angry emails and some threatening telephone calls to Trail Life headquarters.

But it turns out that the boys were not saluting Hitler and contrary to the first Associated Press caption, they were not reciting a creed. The boys were singing “Taps,” a longtime Boy Scout tradition that the Texas Trail USA troop had adapted as their own.

“It really misrepresented what was going on,” Stemberger told me. “There are children involved and that made it more outrageous. They were exploited and misunderstood.”

But what really infuriated Stemberger was the Associated Press’ initial reluctance to remove the photograph and correct the caption. The Trail Life leader provided me with email correspondence he had with Nomaan Merchant, the writer of the story.

“This is really unconscionable,” he wrote to Merchant on Sunday, March 2. “You told me Saturday afternoon you were going to immediately have the AP photo removed completely because children were involved and being photographed.”

“This is unfair,” he continued. “Reasonable minds will not differ on this. Ask any third party what they think this photo is. I told you this exact thing would happen if the photo was not removed.”

Nomaan struck an apologetic tone in his correspondence and told Stemberger he would try to have the photograph removed.

“I was told that that’s generally reserved only for photos that are doctored or so otherwise egregious that they cannot stand otherwise,” Nomaan wrote.

So apparently a photograph that gives the impression that young boys are saluting Hitler (when in fact they were not) is not egregious enough for the Associated Press?

Merchant wrote to Stemberger that he showed the photo to some of his colleagues and they didn’t seem to have a problem with it.

“I really do think it’s a nice image of the boys singing a song,” he wrote.

As an aside, I showed the same photograph to some of my colleagues here at the Fox News Corner of the World and every single person said it looked like boys saluting Hitler.

Merchant did offer an apology and said he regrets “any misconceptions due to this one image.”

“I take very seriously the issue of media bias and did my best to give full weight to all perspectives in the story, which I had a lot more control over,” he wrote.

And that’s the truth.

Stemberger said Trail Life was pleased with Merchant’s story. He called it “fair minded and straightforward. And he also understands that the reporter was not responsible for selecting the photographs that were used.

By Monday afternoon, the Associated Press had still not corrected the caption or removed the photo. So Stemberger posted a message on the Trail Life Facebook page explaining the situation to confused members and angry outsiders. A member of the Trail Life team also called me.

On Tuesday, I reached out to Associated Press to get their side of the story and received a prompt reply.

“Any suggestion that the photo shows the boys giving a salute was unintentional,” AP spokesman Paul Colford told me.

He also said AP had decided to correct the inaccurate caption. The corrected copy states the boys were singing taps.

The AP later confirmed to Erik Wemple’s Washington Post that the photo would be removed from its archives.

Associated Press did the right thing – albeit in a less than timely manner. Still, the damage has already been done. Liberal bloggers are having a field day with the photograph – at the expense of young patriotic boys.

And lest there be any confusion at AP headquarters, any photograph that exploits children is egregious.