Air Force Drops 'So Help Me God' From Oaths 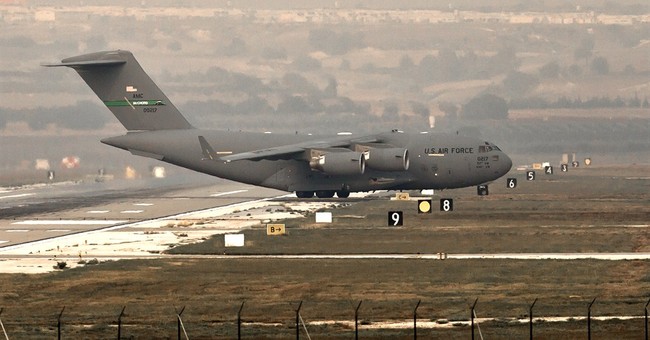 The Air Force Academy has admitted they removed the phrase “so help me God” from three oaths in the 2012 edition of their official cadet handbook.

The revelation came after more than two dozen members of Congress sent a letter to Academy Supt. Lt. Gen. Michelle Johnson demanding that she explain why the phrase was removed.

The lawmakers contend the 2012 edition of the Contrails Cadet Handbook excludes the phrase ‘so help me God’ in the Cadet’s Oath of allegiance, the Oath of Office for Officers and the Oath of Enlistment.

“The Constitution does not require that this phrase be scrubbed from the oath,” read the letter drafted by Rep. Jim Bridenstein (R-Okla.) and signed by 28 lawmakers. “The First Amendment to the United States Constitution prohibits the establishment of religion’ however, the inclusion of the phrase ‘so help me God’ in an oath of service does not rise to this level.”

Bridenstein said “editing the oath for all Academy students is extreme and unnecessary, and does a disservice to the countless individuals who wish to include the phrase as a solemn reminder that they are pledging their fidelity to God and country.”

“It was an editorial oversight,” he said. “We learned within the last few weeks there was a problem.”

“Whoever was doing the editing didn’t catch it,” he said.

He said next year’s edition of the Contrails Cadet Handbook will be revised and will include the phrase “so help me God.”

Last month, the Air Force Academy was embroiled in another controversy involving “so help me God” after they decided to make it an optional part of the Honor Oath. The revision was made following a complained from the Military Religious Freedom Foundation.

The lawmakers directed Johnson to provide information on why changes were made to the Honor Oath and why a poster bearing the words “so help me God” was removed from the Academy.

MRFF President Mikey Weinstein had filed a complaint about the poster. Approximately 68 minutes after he complained, Johnson ordered the art work removed. That decision did not set well with lawmakers.
“We ask that you restore the poster bearing the oath in full to its original location as an honorable reflection of the oath of service,” the lawmakers wrote.

After the Honor Oath was revised, Johnson released a statement affirming the right of Airmen to “freely practice and exercise their religious preference – or not.”

“Here at the Academy, we work to build a culture of dignity and respect,” she stated.

Ron Crews, executive director of the Chaplain Alliance for Religious Liberty, said he’s received calls from concerned parents of cadets – lamenting the change in the oaths.

“This phrase is a deeply-rooted American tradition – begun by George Washington as the first president of the United States and now stated by many who take an oath of service to our country,” Crews said. “The removal of this phrase is a disservice to the countless men and women who wish to include this phrase as a solemn reminder that they are pledging their fidelity to God and their country.”

And while Crews said he respects the right of cadets not to say the word ‘so help me God’, he pointed out the law requires that the words remain part of the oath.

If that’s the case – why were they removed and who gave the order?

Let’s hope these lawmakers can root out the anti-religious forces that have infiltrated the Air Force Academy. It’s high time someone put a stop to the religious cleansing of the Armed Forces.