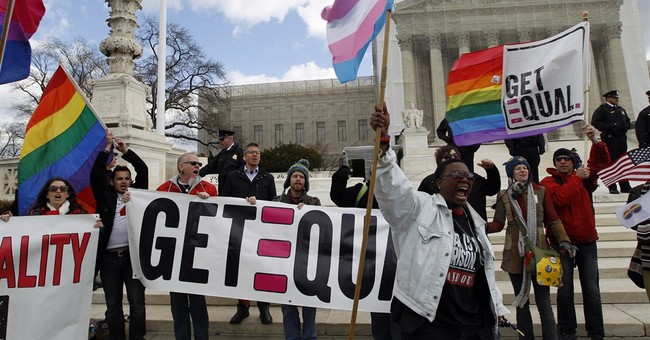 Joe Carr believes a day is fast approaching when pastors will be charged with hate crimes for preaching that homosexuality is a sin and churches will face lawsuits for refusing to host same-sex weddings.

“It’s just a matter of time,” said Carr, the pastor of Waynesville Missionary Baptist Church in Georgia. “What’s happening in Europe – we’re going to see happen here and we’re going to see it happen sooner rather than later I’m afraid.”

And that’s why the congregation will be voting next month to change their church bylaws – to officially ban the usage of their facilities for gay marriages.

“We needed to have a clear statement,” Carr told Fox News. “It’s to protect us from being forced to allow someone to use our facilities who does not what we believe the Bible teaches.”

“These facilities may only be used for weddings that adhere to the Biblical definition of marriage and are solely reserved for use by members and their immediate family members,” the amended bylaws read. “These facilities may not be used by any individual, group, or organization that advocate, endorse, or promote homosexuality as an alternative or acceptable lifestyle. This policy also applies to birthday parties, reunions, anniversaries, wedding or baby showers, etc.”

The church also included a passage to protect their pastor noting that he is not obligated to perform any wedding ceremony that would cause him to violate his conscience or conviction.

“Under no circumstances is the pastor to officiate, participate, or endorse any wedding ceremony that violates the belief and teaching of this church body in accordance with the Bible,” the statement read.

Even though Waynesville is a small community, Pastor Carr said he fears they could be taken advantage of by gay rights activists trying to “intimidate us.”

And Waynesville Missionary Baptist Church isn’t alone in their fears. Hundreds of churches around the nation are considering similar changes to their constitutions and bylaws as a result of the Supreme Court ruling on the Defense of Marriage Act.

“I think we’re in a day where every church needs to have a statement in its bylaws of its doctrinal beliefs on marriage and sexuality,” attorney Erik Stanley told Baptist Press. “This is a proactive approach that churches can take to head off any claims of discrimination in the future, should they occur.”

Greg Erwin, an attorney who represents the Louisiana Baptist Convention, said it’s hard to speculate on what impact the Supreme Court ruling could have.

“It would seem that the law now is that churches do not have to perform marriages that violate its beliefs,” he told The Baptist Message newspaper. “However, if a church rents out its facilities for weddings to anyone but same-sex couples, then a court could find that the church is discriminating in violation of law by only refusing to rent to homosexuals.”

Many Louisiana pastors said the changes are sad, but necessary.

“It’s a shame that we have to vote on something like this,” said Paul Dabdoub, pastor of Ridge Memorial Baptist Church. “But for protection, it is a must.”

“The U.S. Constitution already guarantees the right of churches to decide which sacraments they wish to perform and whom they want to include in these rituals, including weddings,” Lynn said. “So these additions to church constitutions are unnecessary.”

Attorney Stanley said the legalization of gay marriage will have an impact on religious liberty.

“Religiously liberty is on the chopping block any time same-sex marriage is legalized or normalized in the culture,” he told Baptist Press.

Last week, American evangelist Tony Miano was arrested and interrogated in London after he delivered a sidewalk sermon – preaching that homosexuality is a sin. He was charged with “using homophobic speech that could cause people anxiety, distress, alarm or insult.”

American pastor Scott Lively was sued in a United States federal court for preaching in Uganda that homosexuality is a sin. Sexual Minorities Uganda accused him of inciting the persecution of homosexuals during a 2009 mission trip to the country.

And a number of Christian-owned companies have come under legal attack for their opposition to homosexuality.

Hands On Originals, a Lexington, Ken. t-shirt company, was investigated by the city’s Human Rights Commission after they refused to print shirts for a local gay rights group.

The state of Washington is suing a small flower shop after the owner declined to provide flowers for a gay wedding.

Arlene’s Flowers in Richland, Wash., is facing thousands of dollars in fines and penalties for allegedly violating the state’s Consumer Protection Act.

Pastor Carr said he always thought such changes in the culture would occur “way down the road.”

“But the shoes are dropping all over the country,” he said. “This is a religious liberty issue.”

And he is especially troubled about what the future holds for evangelical Christian pastors.

“I believe pastors will be charged with hate crimes and promoting violence against homosexuality by just preaching what the Bible teaches,” he told Fox News. “I don’t believe they are going to pass any legislation protecting pastors.”

Carr said he does not advocate, promote or endorse violence against anyone, “but I’m not going to back away from preaching with the Bible teaches.”