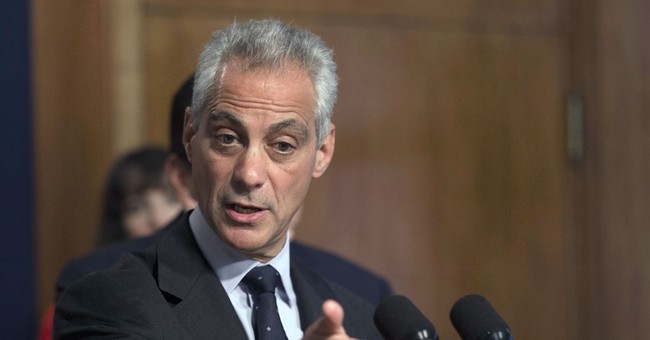 Embattled Chicago Mayor Rahm Emanuel, facing a $900 million overspending problem, is flailing to find salvation. Instead of making the government reforms or hard spending cuts that will save the city however, he continues to reach into the pockets of John Q. Taxpayer. But the pockets have run dry.

Chicago already burdens citizens with some of the highest property and sales taxes in the nation. A substantial tax increase would enrage voters and jeopardize mayor Emanuel’s political future. Unwilling to heed the calls for reform, the local government has begun to investigate creative new sources of revenue.

Chicago’s expansion of the “amusement services” tax is the latest cash grab. Historically, the tax only applied at public venues with seating for over 750 people. It was a tax citizens tolerated at the ballpark, movie theater, or concert hall, but not anymore. Thanks to a fiat administrative decision by the Department of Finance, the city will impose the 9.0 percent tax on services like Netflix, Spotify, Xbox Live, and Amazon One. The tax collector is now in the living room sifting through the couch cushions hoping the residents don’t notice.

The new policy is predicted to generate $12 million in revenue, a drop in Chicago’s ocean of debt. But wait, there’s more. Combine that with other creative solutions from the mayor’s office like, the higher tax on parking spaces, the new tax on leased vehicles, and the new tax on personal property lease transactions, and we have a grand total of $62.4 million in new revenue!

Hardly enough to put a dent in the $900 million bill. These new taxes will not solve Chicago’s problems. They will, however, cripple innovation and investment in the city, establish a dangerous gateway for tax discrimination in the digital marketplace, and violate federal law, state law, and Supreme Court precedent.

Even the credibility of the $12 million in predicted revenue is suspect. The application of the tax is shrouded in uncertainty and affected companies are waiting until they receive the bill before determining their course of action. Regardless of how the city decides to employ the tax, two things are certain. One, it will be the consumer who ends up picking up the tab. Two, the new policy will face legal challenges.

On the federal level, challenges will come declaring it a violation of the Internet Tax Freedom Act, the Commerce Clause, and the first and second prongs of the Supreme Court’s complete auto test. On the state level it’s highly likely to clash with Illinois’ home rule and uniformity requirements.

Chicago’s desperate actions are a microcosm of the national conversation surrounding the taxation of digital goods and services. Congress needs to act to give states more clarity on tax policy in this area. Passing H.R. 1643, the Digital Goods and Services Act, introduced by Rep. Lamar Smith (R-Texas), would be a good first step. This legislation would ensure consumers are not punished by multiple taxes when purchasing a digital good or service, modernize Congress’s role in tax policy for interstate and international commerce to better suit the digital age, and establish clear jurisdiction for the taxation of digital transactions.

Mayor Emanuel and his administration have preyed upon the people of Chicago and have desperately lurched into uncharted territory with the hope of abating the overspending problem. This tactic will fail, and one can only hope the mayor will find the courage to reform government to cost less and let the city begin to heal.

The success or failure of Chicago’s recovery will rely heavily upon the economic revolution from the Internet of Things. Instead of nickel and diming taxpayers with policies that repel new business in this arena, Mayor Emanuel should adopt policy that encourages investment in the City. After all, if digital goods and services providers decide to skirt the unfriendly Chicago marketplace, no amount of creative new tax hikes will save the city from bankruptcy.