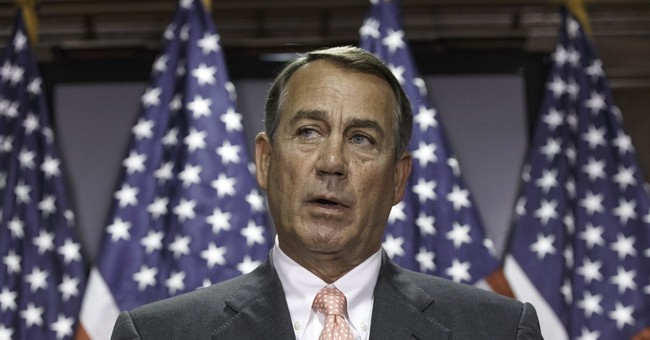 Trending
Whenever Democrats are in real trouble politically, the Republicans seem to come up with something new that distracts the public's attention from the Democrats' problems. Who says Republicans are not compassionate?

With public opinion polls showing President Obama's sinking approval rate, in the wake of his administration's multiple fiascoes and scandals -- the disgraceful treatment of veterans who need medical care, the Internal Revenue Service coverups, the tens of thousands of children flooding across our open border -- Republicans have created two new distractions that may yet draw attention away from the Democrats' troubles.

From the Republican establishment, Speaker of the House John Boehner has announced plans to sue Barack Obama for exceeding his authority. And from the Tea Party wing of the Republicans, former Governor Sarah Palin has called for impeachment of the president.

Does President Obama deserve to be sued or impeached? Yes! Is there a snowball's chance in hell that either the lawsuit or an impeachment will succeed? No!

Barack Obama's repeated disregard of the laws that he is supposed to follow, and his blatantly changing these laws passed by Congress, are a threat to the whole Constitutional form of government, on which all our freedoms depend.

Once a president -- any president -- can create his own laws unilaterally, we are on our way to becoming a banana republic, where arbitrary rule from the top replaces representative government by "we the people."

Why not sue Barack Obama then, or impeach him?

For the simplest of all reasons: Neither of these actions is going to do anything to stop Obama, or even discredit him -- and both can create a distraction that draws attention away from the Democrats' disasters during an election year.

Either the lawsuit or an impeachment -- or both -- can hurt the Republicans, by making it look like they are playing Mickey Mouse politics during an election year. President Obama is already making a joke out of Speaker Boehner's threatened lawsuit by saying, "So sue me!"

Courts don't like to get involved in cases where one branch of government is suing another -- and the Supreme Court does not have to take any case that it does not want to take. Even a lower court can throw out Boehner's lawsuit as a political issue that does not belong in court. Then it will be the Republicans who will have egg on their faces.

As for impeachment, the House of Representatives can impeach any president they want to. But an impeachment is essentially just an indictment that leaves it up to the Senate to decide whether to vote to remove the president from office.

So long as the Democrats control the Senate, impeachment of Barack Obama is guaranteed to lose. And this too would leave the Republicans with egg on their faces during an election year.

The political fate of the Republican Party is not something that those of us who are not Republicans need to worry about. If they want to shoot themselves in the foot again, so be it.

But all Americans have to worry -- and worry big time -- about the fate of this country if Republicans blow their chances of taking control of the Senate.

If Democratic Senate Majority Leader Harry Reid continues his iron control, President Obama can nominate whatever kinds of federal judges he wants to, knowing that they will be confirmed by the Senate.

Since federal judges have lifetime tenure, this would in effect extend the Obama administration long past the point when Barack Obama leaves the White House. All he needs to do is pack the federal courts with judges who share his contempt for the Constitution and his zeal to impose a far-left agenda at all costs.

This year's elections -- especially the Senate elections -- can decide the fate of this country for a long time to come. That is why Republicans' launching of foredoomed symbolic actions like lawsuits and impeachment is such an irresponsible self-indulgence.

When the country is at a historic crossroads is not the time for futile gestures like this, which can create bigger disasters than we already have.