Fix the Dollar, and You Can Fix the Price of Gas 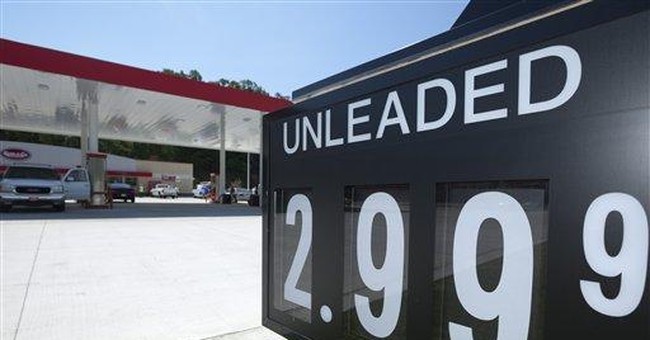 A caller to Powering America Radio recently asked a good question. He recalls the good ol’ days of $.29 gasoline, and wondered if we’d ever return to that, now that oil is abundantly flowing out of American shale formations.

When President Obama took office in 2009, gas was at $1.83, having tumbled from the prior year’s high of over $4.20 under President Bush (And oil dipped to around $30 a barrel for a brief time then as well).

Interestingly, adjusted for inflation, the average gasoline price from 1918 to 2013 is $2.60 per gallon, a price almost seen in some U.S. markets now, like Houston. AAA predicts many American cities will enjoy sub-$3.00 gas this fall. And don’t forget the 18.4-cents-per-gallon federal tax on gasoline, and when you throw in state and local taxes, it’s more like $.25 of every gallon is tax.

Gasoline prices will always be coupled, to some degree, to the price of oil. The other direct correlation of both oil and gasoline prices is the strength of the U.S. Dollar. If you reach into your wallet and pull out a dollar bill and cut it in half, then take that abbreviated dollar to the U-Pump-It station and fill ‘er up, you get the point. As the dollar gets weaker, you have less of that bill in-hand at the pump.

Of late, you have two market forces working on the price of gasoline: Oil tanked 20% quickly to below $90 and the U.S. Dollar had been in an up-trend, at least until the Fed’s last rate-hike announcement, or lack thereof. Sorry, my crystal ball is foggy as to where it all goes from here. $80 per barrel seems to be a strong bottom for oil, but who knows what will happen with the dollar, short-term. Then add ISIS, Putin, Ukraine, Israel/Gaza, Libya and OPEC into the mix, and it’s a roulette wheel prediction. Too gutsy for my trading prowess, but a lot of fun to talk about on the radio.