Terry Paulson
|
Posted: Feb 10, 2020 12:01 AM
Share   Tweet
The opinions expressed by columnists are their own and do not necessarily represent the views of Townhall.com. 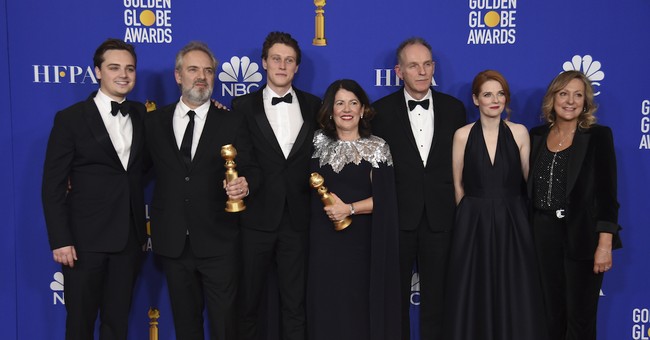 After watching the Academy Awards, it seems to matter little whether an honored movie affirms our culture or our traditional values. In fact, many of the winners involve stories and/or characters who run counter to established American values. In fact, many of the films honored are more popular with Hollywood critics and insiders than movie goers. As a result, more and more Americans don't watch.

After attending the launch of the first Republican Values Center in Simi, California, I was reminded of the importance of our core American values and why they ought to be central in determining how citizens vote. So why not apply a values approach to picking the movies we ought to watch and honor?

On the day after the Oscars, here are ten films worth honoring for living out core American values worth celebrating. In small but compelling ways, the characters and the films make a difference. Their stories stand for something we value and need to support. They are also good movies. In alphabetical order, here are the first ten movies to receive our first annual American Values Film Awards:

"1917," starring George Mackay and Dean Charles-Chapman, brings to life the story of two World War I British soldiers, Lance Cpl. Schofield and Lance Cpl. Blake, who receive seemingly impossible orders. In a race against time, they must cross over into enemy territory to deliver a message that could potentially save 1,600 of their fellow comrades, including Blake's own brother. The Values: Individuals matter in war, war is hell but necessary to combat evil, and the will to do one's duty even in the face of death is critical.

"Arctic," starring Mads Mikkelsen, is one of the best stories ever told about survival. The Danish actor portrays a man named Overgård whose plane crashed in the arctic. Lost, alone, and running out of resources in the Arctic Circle, Overgård misses out on his chance of rescue when the helicopter meant to retrieve him crashes, killing the pilot and injuring a female passenger. Forced to make the difficult choice between attempting to survive within his self-built campsite or trek across the unknown so he and the wounded young woman can potentially make it out alive, Overgård choses to find his way out! The Values: Find the will to never give up fighting for life and leave no one behind.

"Breakthrough," stars Chrissy Metz. When tragedy strikes and a son falls through the ice on a frozen lake in Missouri and is trapped for over 15 minutes before he can be rescued, doctors fear the worst. The 14-year-old boy continues to fight for his life as his mother believes he can come back with the power of prayer. The story inspires a world of believers to pray for a miracle. The Values: Never give up on the power of prayer by a mother and a community of believers. Miracles still can and do happen.

"Brittany Runs a Marathon," starring Jillian Bell, provides a heart-warming, hilarious tale of triumph against everyone's biggest enemy - themselves. Required by her doctor to lose 55 pounds, Jillian Bell's Brittany Forgler takes up group running and eventually sets her sight on running the New York Marathon in a way that turns her life around. The Values: With self-will and determination one can achieve goals and change lives. Community support makes a difference.

"Dark Waters," starring mark Ruffalo, is a ripped from the headlines tale of a lawyer waging a decade-spanning legal war against the environmental impact of DuPont's dangerous, mass-produced chemicals on his community. It shows how the pursuit of justice is a grind that costs crusaders years of their lives in doing what is right. The Values: When you know something is wrong, do your part to see it, report it, and stop it, even if it costs you and those you love dearly.

"Ford v Ferrari," starring Matt Damon and Christian Bale, chronicles the wonderful account of the Ford Motor Company's quest to win the 1966 24-hours of Le Mans race in France. An iconoclastic American car designer and a hot-headed British racer team use their rugged brilliance to get past the corporate suits and marketing executives to help American ingenuity and excellence to win the day. The Values: American can-do entrepreneurial initiative and daring can win the day against the complacent establishment.

"The Mustang" stars Matthias Schoenaerts and Bruce Dern. A man, finally released from prison for violently producing permanent brain damage, fears that his inner demons will keep him from ever being a productive member of society again.  But a rancher running a special social rehabilitation program pairing prisoners with wild mustangs helps open a more optimistic future. The Values: Criminals who have served their time deserve a chance for redemption and rehabilitation. Every saint has a past. Every sinner has a future.

"Richard Jewell," starring Paul Walter Hauser, Sam Rockwell, and Kathy Bates and directed by Clint Eastwood, captures the story of security guard Richard Jewell who found a bomb at Atlanta's Centennial Olympic Park concert. First a hero and then later targeted by the FBI and media for possibly planting the bomb, Jewell and his lawyer fight back and are eventually exonerated. The Values: Protecting individuals from government abuse is a cornerstone of our republic, and to clear one's name is worth fighting for.

"Unplanned," starring Ashley Bratcher, captures the true story of Abby Johnson who became the youngest clinic director in the history of Planned Parenthood. After a life-changing experience she becomes an anti-abortion activist. The Values: The sanctity of life must be a top priority, and taking a stand for what you believe in brings both a purpose and a cost.

"Won't You Be My Neighbor?" stars Tom Hanks as Fred Rogers, the host of Mister Rogers' Neighborhood. It captures the love and kindness of Rogers, not only to the children but to the adults in need of hope and optimism. Even anger, when used well, can help build caring neighborhoods. The Values: Being a good neighbor is all our jobs and can have a profound impact giving hope and meaning to others.

If you would like to be involved in nominating and voting for the top ten movies of 2020 and selecting the best film of the year, send an email to me at terry@terrypaulson.com or the Republican Values Center at  info@rvalues.us.

Terry Paulson is PhD psychologist, author, and professional speaker on Earned Optimism, Making Change Work, Claiming Your American Dream, and Becoming a Conservative Values Voter. Contact him to speak before your group at terry@terrypaulson.com <mailto:terry@terrypaulson.com> .