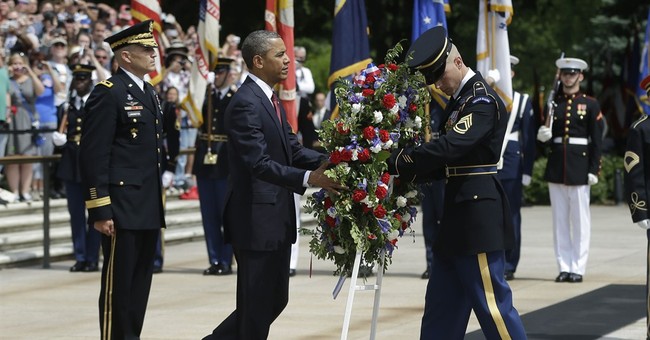 On Memorial Day, tears were shed as programs across the country honored and prayed for those men and women who sacrificed their dreams in order that we might live out our own. Some Americans who had lost a son or daughter, a spouse, or a parent never got to see their loved one reach their full potential. Those soldiers who died left their dreams in their graves.

Their loss is made even worse by an administration that is doing all it can to kill the dreams of Americans they fought to preserve. President Obama's plan for creating jobs takes more and more money from private citizens and companies so that his administration can hire more government workers and fund more government projects. This funds President Obama's dream, not yours.

Many complain that conservatives only want to protect "the rich." It's not the rich that conservatives need to protect. The truly wealthy will take care of themselves. They can move resources, relocate companies, and shelter income to avoid the worst machinations of Washington's tax policies.

Warren Buffett pays a lower tax rate than his secretary because he receives no salary. He doesn't need a salary. His extensive investments feed his lifestyle and fund his future investments. Government taxes investment income at a lower level to encourage savings and the capital investment all economies need.

President Obama's assault on the top 2% of wage owners is not a punishment on the truly wealthy; it's an assault on the "new rich." His taxes hit those successful entrepreneurs who invested in their own idea, worked hard, created jobs, and reaped the benefits of their success. Instead of being honored and rewarded, they watch as Washington takes more and more of their earned reward. At a time many would want to expand their companies, ObamaCare and increased government regulations have just increased their costs.

The gap between the average "rich" and "poor" American may have grown, but the "new rich" do not easily stay rich. In the 2007 Treasury Study--"Income Mobility in the US from 1996 to 2005," the biggest losses in income came not from the poor but from the wealthiest income earners. The top 1% of income earners in 1996 had their incomes halved by 2005. They were not getting ahead at the expense of others; many lost ground.

Those aspiring to reach their dream, the top 20% of wage earners watched their income increase a mere ten percent. Those Americans originally in the bottom 20 percent saw a 91 percent increase in income. This is missed in many statistics because such increases move people out of the lowest 20 percent. In short, there is no permanent underclass or overclass. People can still succeed, but President Obama is doing everything he can to punish those Americans who do!

He isn't punishing "old wealth”; he's punishing "new wealth." He doesn't bring down the wealthy; he keeps out those trying to become wealthy. Abraham Lincoln knew the value of preserving the American Dream: “I don’t believe in a law to prevent a man from getting rich; it would do more harm than good. So while we do not propose any war on capital, we do wish to allow the humblest man an equal chance to get rich with everybody else.”

Though often wrongly attributed to Abraham Lincoln, it was William John Henry Boetcker, an American religious leader and influential public speaker, who first penned "The Ten Cannots:" "You cannot bring about prosperity by discouraging thrift. You cannot strengthen the weak by weakening the strong. You cannot help little men by tearing down big men. You cannot lift the wage earner by pulling down the wage payer. You cannot help the poor by destroying the rich. You cannot establish sound security on borrowed money. You cannot further the brotherhood of man by inciting class hatred. You cannot keep out of trouble by spending more than you earn. You cannot build character and courage by destroying men's initiative and independence. And you cannot help men permanently by doing for them what they can and should do for themselves."

Lincoln and Boetcker understood what President Obama and his fellow class warriors just don’t understand. In a country that is built on personal achievement and free enterprise, there need be no war between capital and labor. When America is working its magic, capital and labor are the same people at different stages of their lives. Workers work to save, then to invest, and ultimately to become owners of capital themselves. They want opportunity not more government programs designed to keep them dependent.

Though we should never forget those who gave their lives that we might have the freedom to dream, may we do what we can to ensure that this and future generations can still profit from the dreams those soldiers died to preserve.