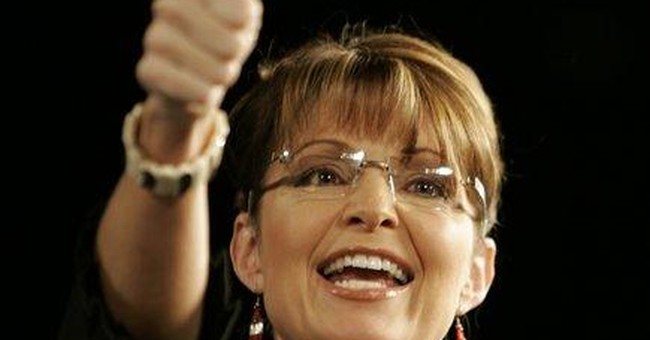 Ever since Sarah Palin exploded onto the Republican ticket, she’s monopolized the headlines! With Palin, Republicans have surged into the lead as a proven team of change and reform.

Heritage Foundation’s Rebecca Hagelin wrote: “What makes her absolutely appealing to ordinary citizens across the country…is that she didn't go looking for greatness somewhere ‘out there.’ Instead, she sought to make a difference in the lives of the people in her path and, in so doing, greatness found her.” Saran is a woman who has “bloomed everywhere she’s been planted!”

With Palin, McCain’s campaign crowds have mushroomed. They’re dancing and shouting in the aisles. They respect McCain but love Sarah’s American story and don’t want anyone to rain on her parade.

The Democrats are in shock and unsure of how to respond. Extreme partisans are throwing up anything negative they can find to derail this Republican dynamo! False rumors surfaced that Sarah faked being pregnant to protect her daughter Bristol’s “previous” pregnancy. Fake bikini shots of Sarah brandishing a gun in red, white, blue and skin have raced through cyberspace. Are fake nude photos to follow? Obama has appropriately called such efforts inappropriate.

Instead of celebrating the appointment of woman to the Republican ticket, feminists are attacking. Responding to a blogher.com question about why feminists were not supporting Palin, “AstronomersWife” replied, “Sarah Palin is no feminist. She's the dream Republican female candidate: she's a beauty queen, she does a very believable job of parroting the line the men around her (Stevens, McCain, Rove) feed her, and she doesn't challenge them. She has no original ideas.… She's an enemy of women's progress, and she's utterly hollow.”

Sarah is an ordinary person who has achieved extraordinary things with everything she’s done. She’s had more executive experience as mayor of Wasilla and Governor of Alaska than both Democrat candidates. Sarah Palin hasn’t caved to the old-boy network; she taken on both Republican and Democratic corruption and won!

But Sarah Palin is not alone. Republicans benefit from many very strong women. Condi Rice, Kay Bailey Hutchison, Elizabeth Dole, Meg Whitman and Carla Fiorino are all very visible, but there are millions more out there taking a stand for conservative principles.

Pamela Geller, a star on the right side of the blogosphere with her Atlas Shrugs blog, asserts: “I don't need equal rights....I'm already equal. I don't need somebody telling me something that's already a fact. All these women like Gloria Steinem, ‘Oh, we made it happen for you!’ You didn't make it happen for me.”

Any woman can look good to her liberal peers by calling for more government programs. It takes assertiveness and depth to take a stand for smaller government and explain why you care enough to say no to more entitlements that create an unhealthy dependence. It takes women of courage to call for a strong military committed to supporting freedom and security in this dangerous world. Republican women have courage and strength.

Republican Women federated (http://www.nfrw.org/) has been making a difference for years. These women are the Republican Party’s secret weapon-- the heart, soul and sweat of the party! This grassroots organization recruits and elects Republican candidates, advocates the Party’s philosophy and initiatives, and empowers women in the political process. They walk the precincts, make the fund-raising calls, register the voters, and “woman” the party headquarters.

Shirley Sadler, president of the National Federation of Republican Women (NFRW), applauded McCain’s historic Palin selection: “This is an incredible milestone for the Republican Party, for the nation, and for women everywhere. Gov. Palin is a tough executive with a solid record of fighting corruption in government. Her bold leadership in Alaska proves that she won’t be afraid to shake up the status quo in Washington and that she would be ready and more than able to serve as our nation’s president. Congratulations, Gov. Palin! Republican women are excited about this historic moment and are eager to support the McCain/Palin ticket this fall.”

Republican women know how to get the job done. Look out—these women are really excited about the McCain/Palin ticket! As Sarah Palin joked, ‘What’s the difference between a hockey mom and a pit bull? Lipstick!’ Why am I so optimistic about the November election? Because there are a lot of “pit bulls with lipstick” on our side! Their numbers are growing and their teeth are showing through the lipstick!