Terry Jeffrey
|
Posted: Sep 09, 2020 12:01 AM
Share   Tweet
The opinions expressed by columnists are their own and do not necessarily represent the views of Townhall.com. 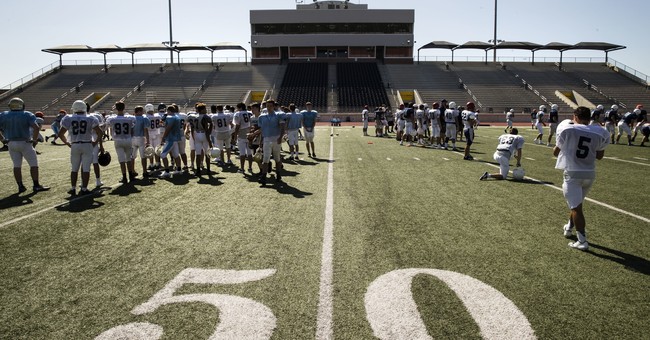 In the fall of 2019, 1,003,524 American high school boys played 11-man tackle football, according to the National Federation of State High School Associations, or NFHS.

That made 2019 the 21st straight year in which at least 1 million American high school boys played football.

No other sport comes close.

According to annual surveys conducted by the NFHS, at least 1 million high school boys have played football in every season from 1999 through 2019.

In no year from 1999 to 2019 did the number of high school boys playing football drop below a million.

It is indisputable: Football is America's game.

In the 2018-2019 school year, which is the last year for which full high-school sports participation data is available, 1,006,013 high school boys played football, according to NFHS. The second most popular sport for boys that year was outdoor track and field. It had 605,354 male participants.

In fact, when the total number of both high school boys and girls participating in a sport are counted together, only one sport -- outdoor track and field -- had more participants than the number of boys alone playing high school football.

Football was the most popular participation sport for high school boys in all regions of the country -- including 43 of the 50 states and the District of Columbia.

(The seven states where football was not the top boys sport in 2018-2019 were: Alaska, Maine, Montana, Nebraska, North Dakota, South Dakota and Vermont. In Nebraska, the 8,579 boys who played football were edged out by the 8,767 who played outdoor track and field.)

Football was the most popular boys sport in Connecticut, where 9,017 boys played on their high school teams. In that state also, outdoor track and field was the second most popular, with 7,749 boys participating.

Football was the most popular sport in Illinois, where 38,366 boys played on their high school teams. In that state, as in Massachusetts and Connecticut, outdoor track and field was the second most popular sport, with 24,047 boys participating.

Football was also the most popular sport in California, where 91,305 boys played for their high school teams. As in Massachusetts and Connecticut, outdoor track and field was the second most popular, with 55,335 boys participating.

Texas led the nation with 165,641 boys playing football in the 2018-2019 school year. The second most popular sport for high school boys in that state was also outdoor track and field, which had 74,522 participants.

When it published the number of boys who played high school football in the fall of 2019 last week, the NFHS noted that the latest number indicated a shifting trend -- in favor of football.

"These numbers suggest to us that parents are appreciative of the risk minimization efforts that have been put in place," wrote Niehoff. "Every state has enacted rules that limit the amount of contact before the season and during practice, and every state has established concussion protocols and laws.

"The continued enthusiasm for football has been evident this fall -- even amid the COVID-19 pandemic," she said. "State associations have worked with government, education and health leaders to do everything possible to offer the sport at some time during the 2020-21 season."

This fall, according to the NFHS, 34 states are playing high school football.

The COVID-19 virus may have turned 2020 into one of the strangest years in the recent history of our country. But it did not kill the sport that has done more than any other to define the high school experience of this nation's young men.