Terry Jeffrey
|
Posted: Jan 16, 2019 12:01 AM
Share   Tweet
The opinions expressed by columnists are their own and do not necessarily represent the views of Townhall.com. 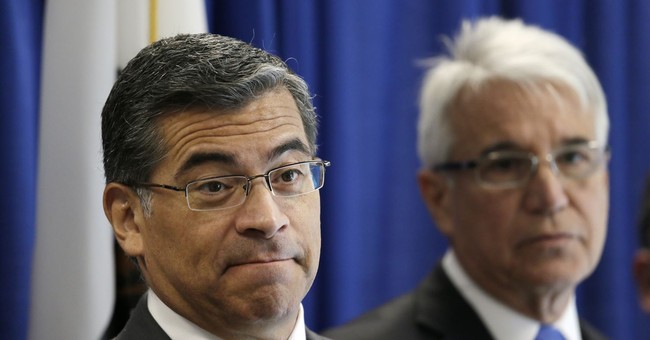 California Attorney General Xavier Becerra argued in the U.S. District Court for the Northern District of California that a regulation issued by the U.S. Department of Health and Human Services would prevent an insufficient number of California women from conceiving and giving birth to children.

The states of Pennsylvania and New Jersey made the same argument -- regarding women in their own jurisdictions -- in the U.S. District Court for the Eastern District of Pennsylvania.

On Sunday, Judge Haywood Gilliam, a California appointee of former President Barack Obama, agreed with Becerra and issued an injunction blocking enforcement of the HHS regulation in California, the District of Columbia and 12 other states that had joined its lawsuit.

On Monday, Judge Wendy Beetlestone, an Obama appointee in Pennsylvania, also agreed. She issued a nationwide injunction on the regulation.

This story, which concludes with federal courts writing the law, started with a Congress that carefully declined to do so.

That happened when the authors of the Obamacare law, enacted in 2010, made sure it included language that was intentionally vague.

That language said health insurance plans must include "with respect to women, such additional preventive care and screenings ... as provided for in comprehensive guidelines supported by the Health Resources and Services Administration."

The law did not say, "Health insurance plans must provide women with cost-free contraceptives, sterilizations and abortion-inducing drugs and devices."

Congress delegated to the Health Resources and Services Administration -- a division of HHS -- the power to determine what types of "preventive care and screenings" should be mandated.

Thus, no member of Congress who voted for Obamacare voted to mandate insurance coverage for contraceptives, sterilizations and abortion-inducing drugs and devices.

They left that for bureaucrats to decide.

Back then, of course, the bureaucrats at HHS worked for President Obama.

Using the law's "preventive care" language as its justification, Obama's HHS issued a regulation in 2011 declaring that health insurance plans must cover sterilization procedures and all Food and Drug Administration-approved contraceptives. All FDA-approved contraceptives included abortion-inducing drugs and devices.

The U.S. Conference of Catholic Bishops immediately responded with precisely the correct prescription. "The HHS mandate should be rescinded in its entirety," USCCB lawyers said in a letter to HHS.

Rather than rescind the regulation, the Obama administration fought multiple cases all the way to the Supreme Court to maintain its power to enforce the regulatory mandate, even against organizations with religious objections to carrying it out or being complicit in carrying it out.

In 2017, the Trump administration's HHS amended the regulation rather than rescind it. While leaving the contraception-sterilization-abortifacient mandate in place, it offered exemptions for persons and organizations who objected to it on religious or moral grounds.

While the Trump administration's version of the regulation would still require taxpayers to pay for contraceptives, sterilizations and abortion-inducing drugs and devices covered in federally subsidized insurance plans, it would not force the Little Sisters of the Poor and other objectors to provide, or be complicit in providing, that coverage.

That was not good enough for Xavier Becerra.

In California's view, he argued, the problem is not that the federal government -- under Obama's regulation -- was forcing Christians to act against their faith in actions that resulted in the destruction of innocent life. The problem is that under President Trump's regulation, more babies might be conceived and born in California, and the state would be "forced" to pay for them.

"Contraceptives are among the most widely used medical services in the United States and are much less costly than maternal deliveries for women, insurers, employers, and states. Consequently, the use of contraceptives has been shown to result in net savings to women and to states," he argued in his first complaint to the court.

Judge Gilliam embraced Becerra's argument in issuing his injunction against the Trump regulation.

"In sum, plaintiffs have shown that the challenged Final Rules pose a reasonably probable threat to their economic interests because they will be forced to pay for contraceptives that are no longer provided cost-free to women as guaranteed by the Affordable Care Act," he wrote in his Sunday ruling.

"The states also have established a reasonable probability," the judge wrote, "that they will suffer economic harm from the consequences of unintended pregnancies resulting from the reduced availability of contraceptives."

Attorney General Becerra has priorities. For him, protecting California's socialist health care system from the burden of newborn babies justifies forcing the federal government to violate both the right to life and the freedom of religion.